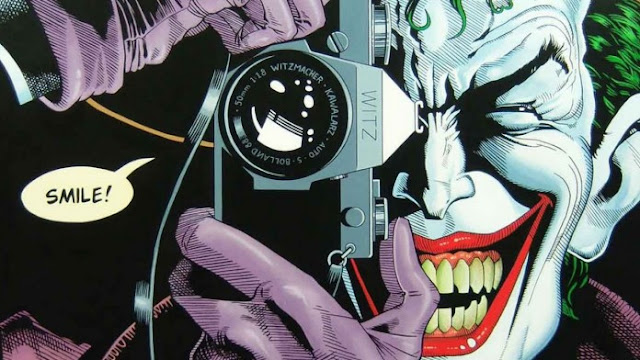 I have to admit, this wouldn't have been a Batman tale I would have selected had I been given the choice. It was recommended to me by a friend who then lent me the book to read. And I have to admit I came away from it with the same opinion, it wouldn't have been one I thought about having to rush to go and get. I don't know if it is because my inner comic book nerd's heart will always lie with Marvel no matter how many DC comics I read but this book just failed to really engage me. It was one of the books where I close it and am forced to wonder, what was the point of all that?

On the one hand, The Killing Joke is one of the most revered and influential Batman stories ever told but that hasn't stopped it from coming under criticism but fans and its very own creators. Alright it was the book that heavily influenced the tone of the Tim Burton Batman films but author Alan Moore has used the words 'clumsy', 'misjudged' and 'devoid of any human importance' to describe his work. He does have a point here as it is by no means the height of his work, to me his run on Daredevil was much better than this, for example the 'death' of Elektra will always be the moment in this writer's career that sticks out in my mind.

One of the things that left a sour taste in my mouth after reading this was the treatment of former Batgirl, Barbara Gordon. All right, what happens here one day turns her into the superhero Oracle, who helps many heroes not least, the Birds of Prey. But it is fairly distasteful, especially when we discover that the Joker stripped her naked and took photos of her. Sorry, but he has already shot her to the point where she won't ever be able to walk again, the picture taking just feels like overkill to me. And the ending of the book made no sense to me, the joke was neither funny, nor did it contribute anything to the main plot. Nor does it square up well to the actions taken by Joker in the previous pages. The story would have worked far better had this been designed to be the final Joker tale with Batman killing him at the end.

But it does have a superb atmospheric feel to it and gives us glimpses as to the Joker's origins. These origins are tragic and one does find themselves feeling sorry for him on some level. I say, some level, because the Joker, to me, has never been an interesting villain, so imagine how surprised I felt when I found I felt sorry for the lunatic! It is also littered with some neat moments, my favourite being the empty gun moment at the end to which I found myself smiling at.

Where the story really shines is in the artwork from Brian Bolland. Looking at his pages, no one can draw the Joker quite like him, here he looks really insane, especially on that cover! Although Bolland has never done interior comic book art since then, it is really crisp and helps to move the story along at a real pace thanks to his crisp storytelling.

Released in 2008 as 'The Deluxe Edition' as it puts it on the cover, it sported a new version of the original inks. When it had been first released the inks had been done in a rush because Bolland had taken so long to draw the thing. Here they give the original inker the chance to do it again using a computer. I have to admit, I don't think it added anything to the story. In fact, had I not done some research on the book I would have been content to think that this was the original ink work!

Perhaps the biggest change here is turning the flashback sequences into black and white with the exception of reds, mostly used on the Red Hood, hood. This works better as it allows the reader to know that it is a flashback and not something else going on alongside the actual plot. But these flashbacks are perhaps the best thing about this book as it finally gives us a glimpse as to the Joker's origins. It shows that Batman and the Joker aren't necessarily all that different, where Batman lost his mother and father, the Joker lost his wife and child. They both lost the two people who were closest to them. But, while Batman had Alfred, the Joker had no one and it was a nice little touch were, in the flashbacks, we see the Joker crying after his first 'battle' with Batman and he is crying blood. It is a striking image.

The other reason I wouldn't necessarily go out of my way to pick up this book any time soon is it's cover price. While not big bucks, you are still spending 12 or so quid for around 48 pages of actual story. Alright you get the introduction and afterward and a little story written by Bolland himself, another one that didn't make a lick of sense, what your actually buying is a 48 page story. Sure it will sit nicely on any collectors shelf but is the price worth the actual material inside? Not really.

Nowadays, the story, despite its many flaws it pretty compulsory reading for modern comic book fans and while it looks great and is a dark little character piece, it doesn't feel essential.

BATMAN: THE KILLING JOKE, WRITTEN BY ALAN MOORE WITH ART FROM BRIAN BOLLAND WAS RELEASED BY DC COMICS IN A NEW DELUXE EDITION HARDBACK IN 2008.