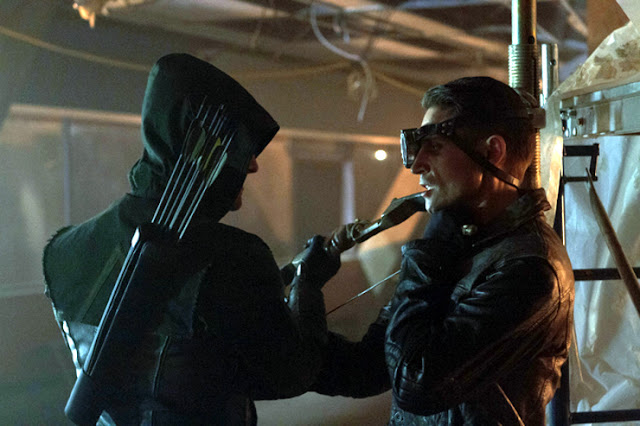 The third episode of the first season is a little dull. There, I said it. This episode features less flashbacks and more action in present day. The episode begins with us following Oliver about to take down another crooked business man but this time, someone else gets there first. This mystery man is armed with a sniper rifle and we get to see just how useless a bow and arrow are against someone with that much firepower. Although we all know that it is a bow and arrow that the Green Arrow uses, this situation and indeed, this entire episode makes us wonder why Oliver uses those as weapons apart from the fact that he knows how to use them. Up against something like that they look inconvenient, slow and inefficient.

The second guy turns out to be none other than the DC Comics villain, Deadshot. When you think about it, what Oliver and Deadshot are doing isn't all that different, they are both on missions to take down people, the only difference is, Oliver is doing it to avenge his father's memory while Deadshot is doing it for money. It is the fact that both these guys were after the same man shows us that the writers want us to question our hero.

This is an interesting thing for a superhero show to do, usually we blindly follow our hero and not bother to question what is going on whether it is right or wrong. This is something that made Arrow particularly stand out for me. It is in these early episodes that we are not too sure if Oliver is a goodie or a baddie. The villain in this episode is served better than China White in the last ep. Deadshot is given plenty to do and has a personal connection with Oliver's bodyguard Diggle in the fact that Deadshot killed Diggle's brother. What the producers also do well is make the villains more realistic especially in these early episodes where the show is finding it's feet before going into the territory of costumed characters. Also evident is the lack of other superheroes, this was something that would change of course but the first season really benefits from it just being Oliver's crusade.

While the Arrow, Deadshot and Diggle moments and interactions are all interesting, less interesting are the personal and family life elements included. For my reviews of the first two episodes, I said that these scenes are some of the most enjoyable moments but here Oliver's sister becomes the bratty teenager she is trying not to become and the way the affair between Laurel and Oliver's best friend Tommy is brought up almost as an afterthought. I suspect that Oliver has more on his mind but still, what is supposed to be "drama" just across as a soapy parody.

What I was pleased about was that the flashback scenes were few and far between and when they were on, they were quite brief. At this point, we still aren't sure who the other inhabitants are but it wouldn't be long before we do found out. And it is also interesting seeing Oliver change from spoilt rich brat to a crime fighting vigilante. Oh and this episode also features Diggle discovering who the Arrow is. Little did we know at the time they would become one hell of a team...

Overall, Lone Gunmen wasn't as good as the opening episodes, but one worth watching if only to get what the hell is going on in the over ridding story arc.