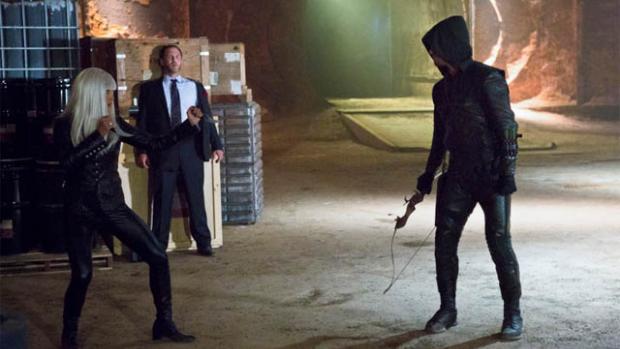 The second episode of the first season, Honor Thy Father is content to continue along the same lines as the premier episode as Oliver Queen once again brings another man from his fathers' list to justice as well as trying to forge a secret identity that will keep him from suspected. Thea is still a mess and won't let up with Oliver about her anguish she felt when he apparently died. Oliver's mother is still conspiring bring the season cliff-hanger closer with ever 30 second scene she is in and Detective Lance is still convinced the vigilante is a criminal and someone who must be stopped at any means necessary. As with all the episodes, there are a few flashbacks but none of which really contribute anything to the main plot. This was something I found confusing when I originally watched the series, did the flashbacks contribute anything to the main plot line of the story. In this case it doesn't but luckily I now know that these little snippets form a second story so they aren't so bad.


This time, the man to get the "you have failed this city" treatment is Martin Sommers and he sees both the Green Arrow and Laurel Lance going after him. It quickly becomes clear that Sommers is a crooked businessman with connections to the Chinese Triad. This leads to the introduction to DC Comics villain China White, who tries to kill Laurel in an attempt to stop her from bringing Sommers to justice, luckily, the Arrow deals with both of them. Meanwhile, Oliver is trying to navigate his way around the world of Queen Consolidated, the family business. His mother wants him to take him up his rightful place as head of the company and she won't take no for an answer. The only way that Oliver can persuade her and the rest of the world that he doesn't want the position is to turn up to an event at the business and proclaim that is no better now than he was before he was stuck on the island, defiling his memory of his father, who set him on this avenging crusade, in the process.

Oliver's attempts to forge along in his new life, even if it, for the most part a fiction that enables him to continue being the Green Arrow, allows for some moments of understanding between him, Laurel and Diggle. One is forced to wonder how after Oliver ran off on a boat and slept with her sister, both Oliver and Laurel could becomes friendly again. Surely she should hate his guts? But the story doesn't really do anything about this. But then again, Stephen Amell is really handsome so how could you not forgive him?!
At this point in the series, Diggle came across as a bit of a useless character. For the story to progress, this meant that Oliver would have to keep on escaping from his bodyguard but when Diggle sees Oliver throw a kitchen knife with great precision, there seems to be a mutual understanding between the two that more happened on the island than Oliver lets on. And while Diggle hasn't worked it all out yet, it is that small scene that stops him from coming across as a useless character and one who actually contributes something to the plot.

Honor Thy Father also keeps the humour that was set up in the opening episode and helps to steer this gritty show away from the gritty Batman movie trilogy nicely. The scenes between Oliver and his family are a particular highlight as he can't last more than 30 seconds in a room with them. Admittedly, some of the jokes aren't funny, like Oliver's Kardashian comment or his talk with Laurel about he dreamt of eating ice cream with her and they fall quite flat. But the show uses these moments to break the tension that builds every 15 minutes or so.

As I stated above, this episode also introduces the villainess, China White and you can tell instantly she is from a comic book universe with her bright white hair. I am slightly surprised that the producers didn't opt to put her in her white comic book cat suit too but luckily, they went for realism and gave her black jackets and trousers. In some respects, this works even better as her hair stands out really well and she is played wonderfully by Kelly Hu. She also gets a few good fights with Oliver Queen both in and out of his costume. It is obvious that even at this point the show has discovered that it can't rely on the businessman of the week storyline and it is nice that they are changing things up with the introduction of China White. But Arrow managed to keep these storylines interesting and exciting with thrillingly brutal fight scenes and who cares if the storytelling doesn't really take itself too seriously, just with these opening two episodes, the show has discovered its successful long term storytelling formula.