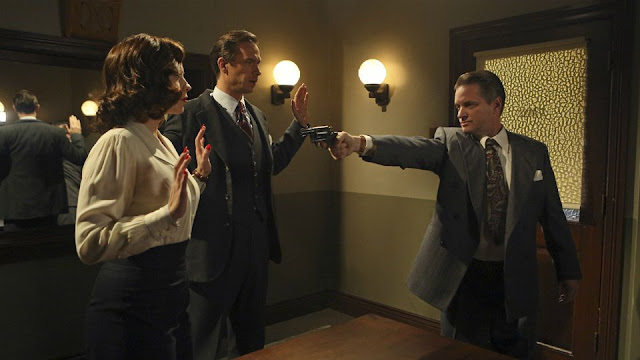 There was a sense of dread which was masterfully written into the seventh episode. Especially when all the characters get separated it becomes apparent that one of them is going to die and who is going to die is whittled down to either Thompson, Sousa or Dooley. For the first few episodes, all the male characters from the SSR were hard to like because of their sexist views towards Peggy but gradually, they have mellowed and I have come to like each of them. So I really surprised and saddened when I discovered who it was who was destined to die...

Looking back over the series, it makes perfect sense that it would be Chief Dooley who bites the dust as he is the one who got the most focus concerning his family. This episode we explore his choices and actions when it concerns his family and how, there is an overriding sense of guilt he feels about being absent from his family for such a long time. It was an effective way to lead into his self sacrifice which occurs in a running jump/explosion manner and while I still find Ivchenko's ring twisting hypnotism bit a little silly, we really get see what a monster he is, especially in the scenes were he gets inside the mind of a Russian soldier and Dooley's.

There was another nice little touch in this episode concerning a suit which looks like a precursor to the famous suit Iron Man wears. Of course, it is miles away from the flying suit we see in the movies and it was nice that there wasn't a lot of focus put on it. Here it is just another one of Howard Stark's inventions but one that is far from perfected. Because it is far from ready it leads of Dooley's death which is something that Jarvis can't overlook. I was also pleased that Dooley gets a good final line.

The lead up to the ending is also one of the most satisfying moments of the entire episode, and it was really great to finally get Peggy talking to Dooley, Thompson and Sousa about how they treat her and overlook her and how that made it easy for her to go behind all their backs because she is basically invisible to them.

Huge kudos has to go to Haley Atwell whose scene were she describes why she kept Captain America's blood hidden really comes across well and she manages to sell just how much Steve meant to Peggy.

We also get some more really good Peggy/Jarvis moments especially when they are both locked up in the interrogation room and handcuffed to the table. It was nice to see Dottie still being rotten to the core though Sousa was a little stupid in that he didn't shoot her when he had the chance. But her escape down the staircase was really cool!

The episode ends with a test run of Leviathan and an entire movie theatre kills each other after a gas is unleased by Dottie which she hides in a pram.

With the next episode being the finale, this series has been a real ride and this episode was definitely one of the highlights of the run with Dooley's sacrifice being done very well, the explosion and the windows blowing inwards looked truly shocking. I'm just sorry that it is all nearly over as this has been a fantastic series