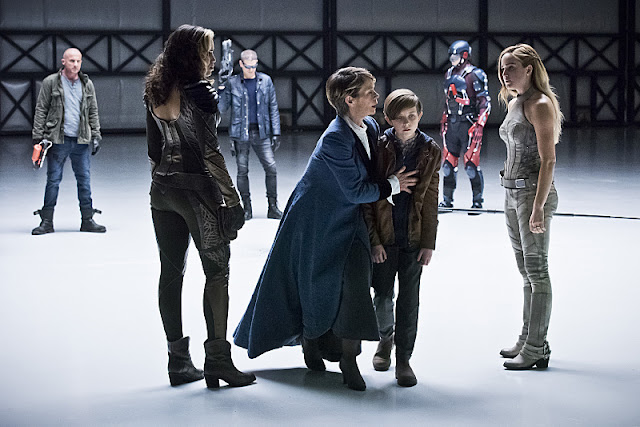 Legends of Tomorrow really knows how to work that time travel magic! We've been to the Wild West, seen possible alternative futures and seen characters from the past. But now Last Refuge sees the writers coming up with another fun way to utilise time travel!

Yet again, the Time Masters decide to send an assassin out against the Legends. But, rather than attacking them in the present day, they send her to take them out of their timelines when they are young at moments when their death won't affect history. The Pilgrim played wonderfully by guest star Faye Kingslee is tasked with the gruesome task. But she is so cold, she does the job with relish. The Waverider reminds me of the TARDIS and The Pilgrim has clearly been based on The Terminator somewhere along the line so the episode becomes about how you would stop the Terminator if you had a TARDIS. And its delightful to see Ray Palmer getting into the spirit of things quickly with a 'come with me if you want to live' line!

I think that this has got to be the strongest episode of Legends so far. There is a lot of fun to be had here, not least a chance to get to see the younger characters, in particular the baby Lenard Snart who will grow up to become Captain Cold. It was hilarious to see Kendra and Sara going to collect him! It was also great to see some rare interaction between pre-Arrow Sara and her father Detective Lance.

It would have been so easy to pin all the emotional weight in this episode on Sara or Ray's past but because both have already much of it explored in Arrow, it is finally time for the writers to give Dominic Purcell and Franz Drameh something weighty to do. Both characters never got much emotional depth in The Flash and I was pleased to see this fixed here.

What was particularly tear jerking here was when Jax's father was on screen and it is a testament to the two actors who had such great chemistry. The scenes they shared both managed to foreshadow the tragedy that would strike Jax's father and give the two characters some father/son moments. Mr. Drameh steals the show here with his emotional acting. His scenes are something that particularly struck a chord with me, someone who has also lost their father and I'm sure millions of other viewers were forced to wonder what they would say to their loved ones if they could go back in time and see them alive and well again.

While the interaction between the older and younger Mick Rory failed to make my tear ducts weep, they provided some much needed comic relief. It wasn't too long ago that Rory was trying to kill all of the team and now here he is working with them and trying to atone for his mistakes. He also displays more care here which leads to some of his funniest moments yet.

The action also on display here is also top-notch. The Pilgrim's ability to stop things mid-air makes her one of the more challenging foes the team has come up against and it was nice to someone else stop her with a simple knife instead of some laser beam!

I find it hard to find faults with this episode, it was the perfect mixture of action and humour, some of which had me LOL-ing uncontrollably, glimpses of emotion and a fantastically strong storyline. And having great guests included in the cast doesn't harm this episode either! Celia Imrie was marvellous!