Doctor Who: Winter for the Adept Review 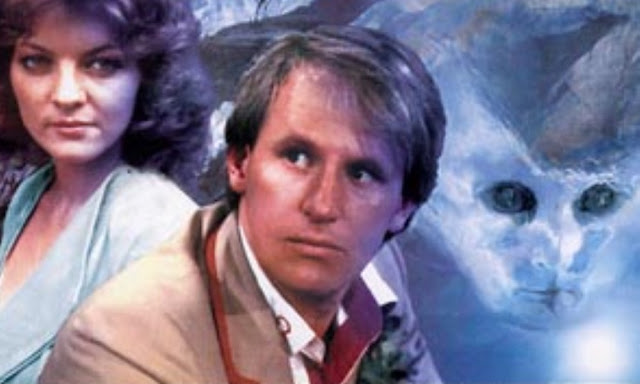 Grab a blanket and a hot chocolate, for this story you'll need it. This story deserves your undivided attention because if the cold, snow and wind doesn't get it, the ghosts, creepy school and eccentric characters will!

Escaping from a Christmas being trapped inside the school, Peril and Alison escape onto the snowy mountain's from their bedroom window, with Peril going to elope with the dashing Lt. Sandoz of the Mountain Rescue Force. What happens instead is that they end up rescuing Nyssa who has been teleported from the TARDIS in an accident. They take her back to the school where is put under the dubious protection of the strange staff that have remained for the holidays. Gradually a blizzard begins to descend over the school with Lt. Sandoz and the Doctor both arriving just before the snow becomes treacherous to anyone caught out in it. The school's inhabitants suddenly consists of the Doctor, Nyssa, Lt. Sandoz, two students, two teachers and a rather unhappy poltergeist which doesn't want any of the inhabitants to leave alive.

Author, Andrew Cartmel, sets aside his master plan and spins a griping gothic yarn with the perfect atmosphere, you can almost feel the cold wind whistling through the mountains!

What Cartmel also does is start to develop Nyssa from the quiet character on television into a more vocal character who isn't afraid to say when she doesn't like something. Something that Big Finish always succeeds in doing is developing characters that didn't really get a lot of time to develop on television. Nyssa is one of the characters that, over the many years the character has been on audio, has outgrown the persona she had on television. In this story she begins to develop her cynical and stubborn sides. She is also downright catty and rightly so, not only is she teleported from the "intolerably warm" TARDIS only to arrive knee deep in snow thanks to the Doctor, he also refuses to understand why she is angry about it.
Though the Doctor should just be happy he is only getting the sharp edge of her tongue, Tegan would have hit him for that!

While Winter for the Adept introduces India Fisher to the listener as Peril, she manages to bring the same boistrious energy when she begins to play Charlie with the Eighth Doctor a little later, the other characters manage to do something that Big Finish is also unfortunately good at. Doing rubbish accents. Hannah Dickson as Mlle Maupassant is off with her French accent and subsequently, words are said wrong. She is not as bad as Peter Jurasik as Lt. Sandoz who sounds completely uncomfortable in the audio format, his voice changing from confident to not confident within the same scenes at times. A google search has since told me that is one of the few things he has done audio-wise.

But those are only minor quibbles as Winter for the Adept is really enjoyable from start to finish, with great interaction between leads, Peter Davison and Sarah Sutton despite this being only their second audio adventure together! A story full of atmosphere that doesn't ever let up, Winter for the Adept is one of my favourite Big Finish adventures!

WINTER FOR THE ADEPT, WRITTEN BY ANDREW CARTMEL AND STARRING PETER DAVISON AND SARAH SUTTON WAS RELEASED BY BIG FINISH PRODUCTIONS IN JULY 2000.