Doctor Who: Return to Telos Review 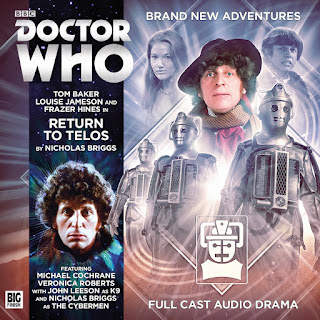 This story is suitably epic end to a brilliant run of adventures which see's Frazer Hines pop up to recreate his role as Jamie McCrimmon who was a companion to the Second Doctor who also went to the planet Telos in Tomb of the Cybermen.

He is joined by Bernard Holley who plays Peter Haydon, the same character he played almost 50 years ago and their presence really boosts the story despite the fact that the Fourth Doctor and Second Doctor crossing over isn't something new, the pair crossed over in the novel, Heart of the TARDIS and then in the Nest Cottage Chronicles from Audiogo.

Elements of this story are reminiscent of the Sixth Doctor serial, Attack of the Cybermen which feature the metal monsters also trying to travel through time and change elements of their past but writer Nicholas Briggs pulls this story off much better than Attack could ever have hoped to achieve.

The one thing that you have to do is really concentrate on the background music and sound effects which helps to maintain a sense of place and the scenes on Krelos are incredibly well put together.

I think where this story stumbles is that we don't get any scenes where Leela and Jamie are together. This could have been something that would have been great as they are both characters who act out of instinct rather than thinking first and they have many of the same mannerisms and characteristics.

Now, Big Finish have done the Telos Cybermen so maybe its time for the proper show to bring them back and make Peter Capaldi a happy man!