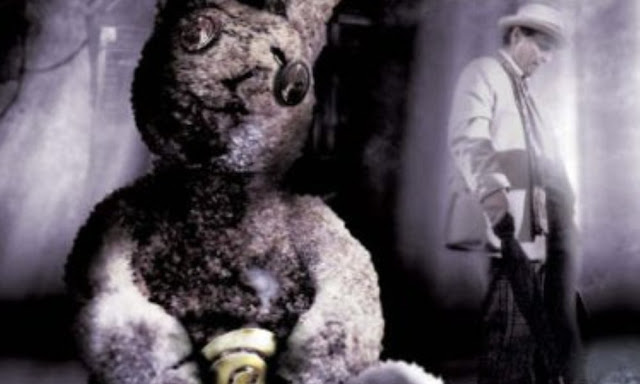 No matter how you look at it, you can't help admire, Sylvester McCoy's performance as the Seventh Doctor. He was one of the few people who were willing to keep the show alive at the end of the eighties and his Doctor was as troubled as the show's future. His later stories moved away from the quirky and experimental tone that his earlier series inhabited and were full of darker, more eerie tones not seen since the early Tom Baker years in 1974.

That is what Night Thoughts is full of, there is that same dark and eerie tone running through it. The story sees the Doctor, Ace and Hex find themselves at a large mansion. Stationed inside the mansion are a group of academics along with a young girl and her toy rabbit. When murders suddenly start to pile up, the Doctor and his friends must find out what is going on and save the day.

Night Thoughts is a marmite story for many fans of the show as in some parts it is really good but really bad in others. Some people either really like it or hate it. I am happy to report I like it and would like to point out it's good points. The presence of Sylvester McCoy as the Doctor and Sophie Aldred as his companion Ace are a welcome presence on this adventure as is their new friend Hex played wonderfully by Philip Olivier. It also remains authentic to the period it is set in. McCoy's Doctor is still portrayed in the same playful yet uneasy way he was depicted on screen. And the play is superbly disturbing in places with zombies, bear traps and deaths galore and all the action is realised very well and keeps the listener interested especially as it escalates towards the end. The sound design is also top notch, painting colourful pictures in our mind's eye.

But, for all it's qualities, the plot itself isn't solid enough, it jumps around so fast in the first two episodes that I ended up feeling super confused on my first listen. Something else that also slightly annoyed me was the supposed cliff-hangers at the end of every episode. If you were going to do something as exciting as Ace getting her leg caught in a bear trap at the end of episode 2, don't then say that her leg wasn't caught at all and the scream she gave out in pain was cheekily misleading. Also the story is plagued with hammy acting from the guest cast which doesn't help the story but, you could look at the hammy acting as being in keeping with the McCoy era which often featured guest cast's who hammed things up.

Night Thoughts is a curious little play, as much as the play can be praised for keeping the right tone and the great performances from the regular cast, you can pick an equal number of problems off it. But, if you are a McCoy fan then this does evoke that era extremely well, it is just a shame that somewhere along the line, it trips up and never gets back up. Perhaps it got it's leg stuck in a bear trap...