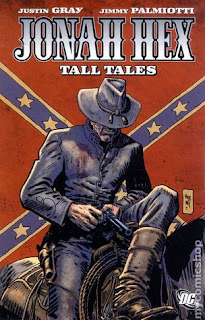 Tall Tales was my third adventure in the world of Jonah Hex and it gave me an insight into his background, a welcome offering as he was character I knew very little about. Tall Tales is better than the previous collected volume I read, Counting Corpses but I still felt the stories were very much something or nothing. Maybe this is a trap that long running comics fall into. Good ideas are used up at the beginning and that leaves nothing new to be created later on.

The first story, The Brief Life of Billy Dynamite, was a surprisingly dark tale and I'm not sure what to make of it. The story features a child called Billy Dynamite who see's his parents killed in a shootout. He then swears vengeance on those who killed them and tries to kill them and is killed in the process. This was the shock, the death of a child in the comic book and to actually see the killers throw him into fire with dynamite strapped round his waist was a bit near the knuckle for me. I'm not adverse to violence in my comics but here I draw the line. I didn't know what to be shocked at, a child being killed off in a book or the lack of care that Hex displayed to the act because he wasn't getting paid to bump off his killers! It was a good way to kick of this book.

The second story, More Than Enough, was your average story with Hex being hired by a native American to stop those who want to get her land and will stop at nothing to get it. While I preferred this story to the last one it was the same old Hex story being told again and so obviously a filler issue, nevertheless I liked the art from Phil Winslade, someone I had never heard of before.

The next story, First True Love, shows us Hex's upbringings. I have no idea if this was something that readers had ever seen before, I certainly hadn't and found it quite interesting. I was surprised to find that people treated each other like that in those days but I had to remind myself that this was the Wild West days and not the semi-civilised world we live in today. It was good look into the origins of this character with some good art from C.P. Smith and it was a welcome change to see Hex defuse the situation without shooting anybody.

Tall Tales & Riders on the Storm which sees two young boys caught in the crossfire between Hex and some of his enemies although it is the baddies who get the young boys out of trouble, does Hex have a problem with kids or something? It was another run around and ultimately forgettable tale with Jordi Bernet once more on art duty.

Every Bullet Tells A Story, sees Hex take the side of a man whose wife was killed because they wouldn't give over their land. The man dies, which Hex doesn't really seem to care to much about and we get a little cameo from a character in the story You'll Never Dance Again. Another something and story that for the most part went in one ear and out of the other.

Finally, Blood Lies Bleeding with art from Brian Stelfreeze, is another typical Hex story which sees him picking a fight with someone who will come back to haunt him later. Nothing interesting happens in this story except for the introduction of a villain who looks pretty interesting.

Ultimately, the majority of this book is forgettable. I didn't enjoy the first story too much for the reasons stated above and all I got out of this book was information about a character whose origins I didn't know much about.