Gotham Central: The Quick And The Dead - Collected Volume Review 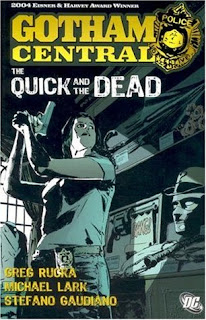 This was my first step into the Gotham Police Department, I wasn't too sure what to make of it at first. Something set in Gotham where Batman wasn't a central part of the story didn't really intrique me. But, then I remembered that against all my hopes the TV show Gotham had managed to really win me over so I picked this book up and decided to give it a go. And I'm glad I did as I really enjoyed it!

Something that struck me straight away is that the first three issues collected in this volume are stand alone stories that don't move along with the frantic pace that the final few, one continual story do. This really allows the readers both oldies and newcomers to the world of this comic book to really settle into things and get a great grasp of the characters as well as letting the characters each have their own moments to shine including Montoya's fist fight with dirt cop Corrigan and Commissioner Allen's conversation with Batman who does put in one or two little cameos throughout this book.

That said I am going to have to nitpick bits of some issues collected here. Gotham Central is supposed to be an ensemble piece, focusing on the department as a whole and while I understand that earlier books did this with great success, author Greg Rucka chooses instead to focus on the character of Montoya. While I do admire Rucka's work that he has done with Renee Montoya, I just can't shake the feeling that the focus on this single character works in detriment to the other characters which had already been established in previous volumes.

This is visible in one scene featuring Montoya and her partner trying to make a deal with Doctor Alchemy to save another one of their officers life. Alchemy's dialogue with Montoya when he insults her sexuality are shown but the conversation his has with her partner is shown only in excerpts. It appears that Rucka's devotion to Montoya completely eclipses any chances that her partner Allen has in being in the spotlight. I think that this book would have been a lot stronger had both the characters been equally distributed in said spotlight.

There are also some guest characters from The Flash comics which don't get used as well as they could be. The Keystone cast used here end up coming across as quite generic. All of the Keystone cast have their reasons for fighting crime but none of which are addressed by the writers and having had some experience with Greg Ruka's and Keystone's creator Geoff Johns work both previously and after this, I had come to expect better from both of them.

I did enjoy this book and would recommend it to other comic book fans like me. But this volume fails to raise the bar in terms of what comic books can do. In fact, it fails to reach the bar that Gotham Central set itself. But I was pleasantly surprised by this book.

GOTHAM CENTRAL: THE QUICK AND THE DEAD, WRITTEN BY GREG RUCKA, WITH ART FROM MICHAEL LARK AND STEFANO WAS RELEASED FROM DC COMICS IN 2006.