Doctor Who: The Entropy Plague Review 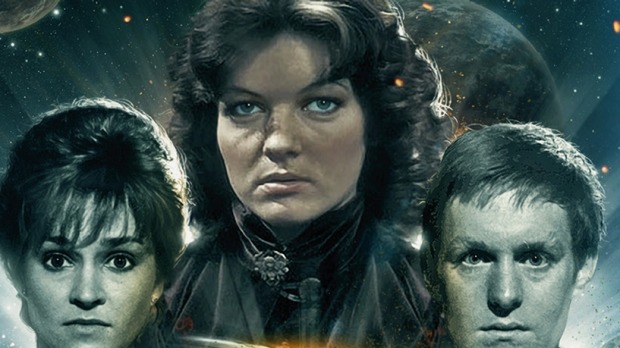 The Entropy Plague continues where the previous release Equilibrium left off with the Doctor, Nyssa and Turlough following Tegan who has been kidnapped by a gang of pirates.

When the TARDIS crash lands they discover a planet on the edge where the inhabitants and refugees from other worlds are celebrating the end of the universe. But there is no electrical power on this planet and a desperate scientist Pallister with the aid of his steam powered robots is guarding the only CVE out of the dying universe. He demands horrific tributes from those who want to leave into N-Space and this leads to people being kidnapped from the streets and their homes so that the selfish and evil can leave. Meanwhile the population suffer from the ravages of entropy pockets and the deadly Sandmen.

The Entropy Plague stands out from the rest best of it's unique way of story telling. Each episode has a different member of the TARDIS crew conveying what happened in the story. Its a clever device as it allows us to witness a number of events from different points of view and we can enjoy the different thoughts that each character has.

I also enjoyed the little nod to Death to the Daleks, which see's the Doctor have to open the TARDIS doors with a crank.

The Sandmen are effective creepy monsters if a little underused, it would have been nice to hear more from them in the streets of the world during the scenes with Tegan, Nyssa and Cherry Ann. Cherry Ann is an interesting character and allows the listener to relate to the story as throughout this story to feel sympathy for her when we discover what has happened to her brother. She is a great little character and it would have been nice to hear more from her but this only makes us feel even more sad when she makes the ultimate sacrifice at the end of the story.

Ultimately, this story is story about Nyssa. While she was awesome on television she never got the farewell she deserved in Terminus and the whole scene felt like a late edition to the script, this story finally gives her the farewell she deserved all those years ago. In fact it leaves the listener an emotional wreck who is racked with tears long after the story is over, or was that just me?

The acting award in this story must go to Sarah Sutton who does a great job in that final scene where she writes a letter to her children even though she will never see them again...

This story and indeed the whole E-Space trilogy is a fantastic listen and an emotional rollercoaster.

Surely these have to be some of the best Big Finish releases ever?