Doctor Who: The Black Hole Review 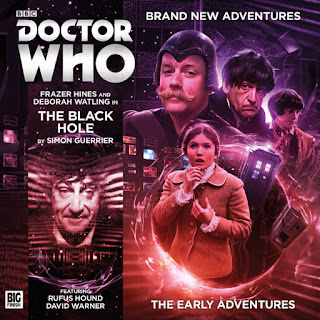 It is an absolute pleasure to hear this TARDIS crew together again as not many of their televised stories exist anymore. I personally take any opportunity to hear these three together whenever I can. It is obvious that getting Frazer Hines and Deborah Watling is always a success so I hope to hear more from these two in the future and one really does hope that the rest of their television stories are found one day but we also have to steel ourselves for the news that they won't ever be found...

This four part story is very reminiscent of the era it is based in and it is easy to imagine this story told in glorious black and white but things do tend to bog down particularly around the mainly static and expository part 2. It is a shame that happens after the strong episode 1. Episode three side-lines a lot of Jamie and the Doctor but don't worry, you'll see them again in the Two Doctors. Seriously, this story ties in, I think, with that piece of chronology while Victoria is left to fend for herself against the baddie.

Despite being spread across four episodes it becomes apparent pretty quickly that this story would have been better suited to the two part format of the companion chronicles as the rest of the story is full of unnecessary padding out much like some of the six part televised serials.

What is really disappointing is that the villain's true motivation is money? Money? Yes for the most banal of reasons it does progress the plot but really it is a failing especially for a show such as Who. This isn't a clichéd crime drama.

However, Frazer Hines is his usual fun self sporting an uncanny impersonation of Patrick Troughton while managing to also recreate the voice of Jamie, a character he played over 40 years ago. Deborah Watling is always a pleasure to listen to particularly in the scenes where the two of them are bouncing off one another.

While this might not be the most fantastic of Big Finish audio play's, it is worth a listen just to hear that sixties TARDIS team back together again. Sort of...