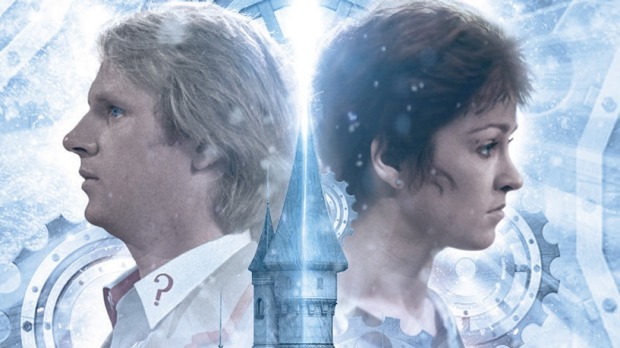 Still trapped in E-Space, the Doctor, Tegan, Turlough and Nyssa are on the trail of a missing component from the TARDIS that if they don't get back means they won't escape from E-Space.

Equilibrium see's the TARDIS crash on the planet of Isenfel, a world of snow and ice and ruled by its own snow queen. While Turlough finds love in the form of the feisty princess, Nyssa and Tegan discover a secret that could threaten to overturn the whole of Isenfel society and the Doctor discovers that changing said society overnight for the better might not be possible on this cold world.

Following the excellent Mistfall, author Matt Fitton really ramps things up here. There is a sense of things escalating quickly spiralling out of even the Doctor's control. Fitton manages to create a world which teeters on the brink of no return a world which constantly needs balancing and a world that mirrors some of the problems the real world is facing today.

While Mistfall focused on Ecological problems and the problems with mistaking accidents as attacks this story deals with the problem of population control and as Nyssa says in this story there are some things that you can't control. While there are some parts of the world that still today have population control in some shape or form this story demonstrates what could happen if it all went wrong one day. Could we be doomed to suffer the same fates as those on the world of Isenfel?

Its safe to say that so far this series of E-Space stories have followed along the lines of the original TV trilogy. This first story of these audio adventures was set on Alzarius and this one, while not featuring Aukon and his vampire cronies, features a society in a similar state of decay.

Perhaps the real strength of this release is that Fitton manages to do something that the writers in the 80's couldn't. He manages to split up the three companions and give them each enough to do. Not only does he give them enough to do, he also gives them things to do which are integral to the plot to help it move forward. On television the Fifth Doctor never showed the level of self doubt that he shows here and it adds another layer to this Doctor and I think that only Peter Davison with his Doctor being the most 'human' on television could pull off his "Am I a good man" moment.

Throughout the story, Nyssa is the voice of reason. She gives the Doctor a pep talk when he is doubting what he is doing while Tegan is the heart and soul of the piece questioning the ethics of Isenfel, their bloodsports and their treatment of servants. Being the only human character in the piece her reaction to the discovery of how they balance their world by sacrifice is made more believable because we, the listener, can relate to her. Plus Janet Fielding is absolutely brilliant so that helps!

Throughout the proceedings, Turlough is the more comical of the characters especially in the scenes between him and the princess Inger where she mistakes his reluctance for hunting the snow beasts as his version of playing hard to get.

The only issue I had with this release was nothing to do with the story, I watched Ella Kenion as Mrs. Cakeworthy from the Only Fools spinoff, The Green Green Grass and I couldn't see her as anything else in this story!

Equilibrium is a good story with a strong plot, strong characters and strong moral questions, some of which resonate with our world today and might teach this world a thing or two.

Everyone involved with this story should be very proud. Very proud indeed.