Doctor Who: The Exxilons Review 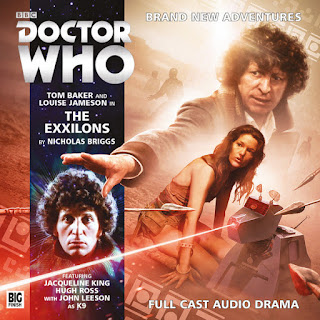 "A city that had destroyed its own civilisation by controlling the minds of its inhabitants. And it gained its power from a gigantic beacon."


The Doctor, Leela and K-9 arrive on the imaginatively named planet, E9874, where alien overseers and architects are using the primitive, native culture called the Tarl to construct great beacons to deep space in exchange for introducing to culture and knowledge.
But what is it's purpose? Who are the Locoyuns really? And why are the Tarl workers dying horribly in their wake?

The story bears some striking resemblances to mobile phone companies scamming residential areas into low paying life time contracts in exchange for putting cancer-causing EM field generators on their roves and what author Nicholas Briggs appears to be taking aim at in this story is related but in a larger scope.

Its a pleasant change to see that the usually action oriented Briggs, who also directs this story, draw a line in the sand and write a story with a much larger statement but there's enough sci-fi here to keep fans of the genre interested throughout while holding a larger meaning when you read, or rather hear, between the lines for this story.

As appears to be the case with several of the Who audio adventures of late, the Doctor and companions are slightly side-lined in favour of the involved if not convoluted mechanics of the story and the fleshing out of it.

Nevertheless its always a pleasure to hear Tom Baker and Louise Jameson playing their roles from the mid-seventies doing their Graham Williams thing and the unexpected but enjoyable return of John Leeson as K-9. He gets more to do in the recent Gareth Roberts boxset.

If you don't mind something of a reprise of the setup of The Face of Evil, then this is the story for you.

THE EXXILONS WRITTEN BY NICHOLAS BRIGGS AND STARRING TOM BAKER, LOUISE JAMESON AND JOHN LEESON AS K-9 WAS RELEASED BY BIG FINISH PRODUCTIONS IN JANUARY 2015.