Doctor Who: The Doomwood Curse Review 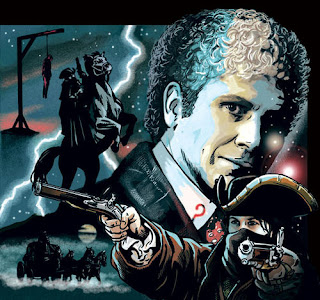 The Doomwood Curse is a pseudo-historical story featuring Dick Turpin, an historical persona who hadn't previously been given the Doctor Who treatment. The story does feature a quirk, it is also a pseudo-fictional tale. This is because the Sixth Doctor and Charlie don't meet the original Turpin but a fictional take on the man.

The plot involves fiction blending in with reality and this concept works well in story terms and that is thanks to the ever reliable author, Jac Rayner who had the clever idea to centre the story around a person who was both real and fictional. There is even a nod to Robin Hood who would have worked just as well in this story but Turpin is indeed a more interesting choice!

The story is distinctly different between episodes one and two and three and four. The first two episodes are set in a murder mystery situation full of peculiar goings on before we jump into an action romp full of more established concepts that come with an action story.

The first disc featuring the first two episodes are the best points of the story with things being distinctly mystifying but I felt a bit disappointed by the reveal at the end of episode two as I was enjoying everything being rather strange.
In this story, Charlie actress, India Fisher gets to really stretch her acting muscles and really seems to enjoy herself in this story.
Another stand out performance comes from Geraldine Newman as the quasi-villainous aunt and she really seemed to be channelling the character she previously played in The Stones of Venice.
Hayley Atwell is also good as usual with her character. I have noticed that she does play interesting female characters in Big Finish plays.

I felt that the second disc wasn't as good as the first as some of the strangeness and mystery from the first disc was gone. However I did enjoy the journey to York with Turpin and Charlie and the Doctor and Eleanor as it was quite atmospheric.
However, I felt the climax was a bit rushed but the scene where the particles turn Turpin into a giant who towers over the city of York did feel a bit B-Movie!

I did feel the concepts could and have been developed further but, not every story needs to be high minded speculative fiction.

Overall, while this story isn't high concept or mind boggling it is a bit unusual, enjoyable, quirky and rather satisfying.