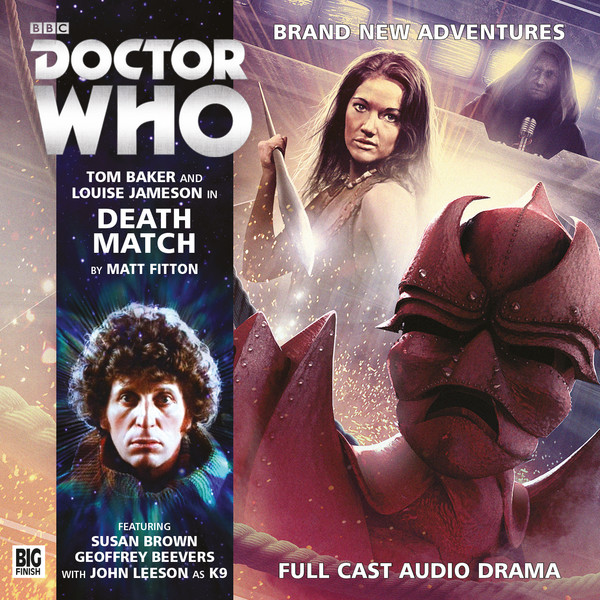 Based on experience, battle competition episodes from everything to Merlin to Star Trek come of as rather naff and unfulfilling. But this story, written by Matt Fitton made my trepidation completely unfounded which I'm glad to say.

Picking up directly from Requiem for the Rocket Men, the Doctor and K-9 are on the trail of Leela who, after leaving the TARDIS, has been kidnapped by the Master. The are alerted to this by Marshall, the Rocket Man who turned good and rebelled and caught the eye of a certain warrior Who companion.

Using Leela as his champion in the ring, The Master becomes the boss of the Death Match arena, a venue which provides bloodthirsty battles for the enjoyment of the rich and powerful. But of course hosting battles for the rich and ruthless dictators is only one part of the Master's plan.

Once more we are given some great interaction between The Doctor and The Master with Tom Baker and Geoffrey Beevers delighting in their scenes together and giving us a terrific battle of voices.

As per-usual Louise Jameson gives her all as Leela and is driven into an emotional territory that we rarely saw on the television screen. The story helps to pave the way for some much needed context as to why Leela leaves the way she does in The Invasion of Time as well as K-9's willingness to leave with her.

Although billed as a separate story, Requiem for the Rocket Men and Death Match work well as a four part story to be listened too one after another with a deft change of location during the mid-way point.