Doctor Who: The Yes Men Review 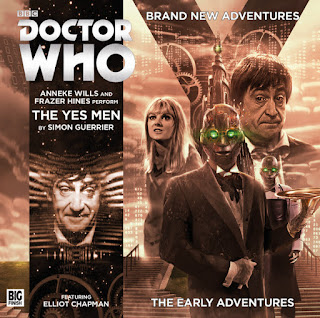 The Yes Men kicks off the second series for The Early Adventures range by Big Finish.
After a rocky start, the first series was a mixed bag of releases and so it is up to the Second Doctor and his companions to put things right again. Do they do it? Yes!

The plot is delightfully straight forward with the Doctor arriving in the colony of New Houston because he wants to pay his respects to an old friend, Meg Carvossa who has recently passed away. However they discover an relatively empty world where the robot servants are having problems of their own.

A tale of intrigue and suspicious death revolves around the wonderfully named Nesca Bangate, played by Timothy Speyer and the heir to presidency Harriet Quilp played with authority by Lizzie McInnerny.

While this plot is being explored by the Doctor and Polly, it leaves Jamie and Ben to explore a sub-plot that deals with slavery and exploitation and leaves the listener questioning what would be considered right and what is wrong but doesn't provide any more than the gentlest amount of proselytising and rightly focuses on entertainment and accurate reconstruction of a Second Doctor story.

I feel that this story proves to the listener that The Early Adventures range is better suited to the Second Doctor era mainly because most of the regulars are still alive. The recasting of Ben Jackson originally played on screen by Michael Craze is an excellent idea instead of having one of the other regulars doing his voice which, as we have heard in the last series, doesn't always work.
The script is top notch and highly entertaining throughout and the tight direction means the story doesn't drag. The music is a wonderful recreation of the sounds we heard from the Troughton era and the robot voices are suburb and wonderfully creepy.

The regulars are on top form top, effortlessly recreating their old characters. Frazer Hines doubles for the voices of both Jamie and the Doctor. His recreation of Troughton's voice is excellent and makes us feel like Troughton is still with us. Anneke Wills as Polly is also marvellous and manages to remind me of why she is one of my favourite companions from Who's long history and she gets plenty to do as she explores the world with the Doctor and isn't side-lined like companions found themselves being in the previous season.

I think that is safe to say that Elliot Chapman is wonderful at being Ben. Michael Craze sadly passed away in 1998 and Elliot does a wonderful homage here, capturing his voice perfectly. I can't wait to hear more from him.

This story is a joy to listen to and after only a few lines, the focus is most defiantly on the story, which is how it should be.