Doctor Who: The Sands of Life Review 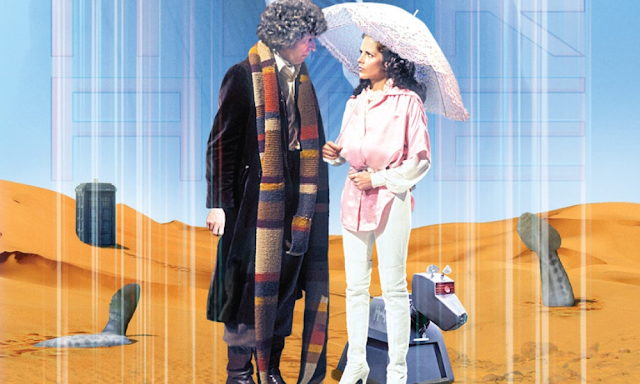 "We will return to the sands of life..." The Laan

The Sands of Life is actually the first part of a story that is continued in the next release, War Against the Laan and features three episodes instead of the usual two in the Fourth Doctor releases and one does wonder if this title needs the three episodes. Most of the action happens in the next story and this story does feel somewhat like padding and one does wonder what function the three episodes play in the long scheme of things especially as it is evident that this title only needed two parts to convey this story.

I actually enjoyed episode one. Its fun and the relationship between Tom Baker and Mary Tamm's characters The Fourth Doctor and Romana is electric and with the added bonus of including K-9 this episode is really good. In fact Baker, Tamm, John Leeson (K-9), David Warner (Cuthbert) and Toby Hadoke (Mr. Dorrick) are all on top form and are wonderful to listen to especially when they all get to act together and Martin Montague does a wonderful job with the sound design.
There are some interesting flashback sequences to previous television episodes and names being dropped of previous companions with Romana being called Leela and K-9, Sarah Jane. And all the quotes from the televised stories are correct and haven't been changed in any way shape or form but I get the feeling that the cast were probably asked to say them again.

Part Three is also a good listen with the Doctor and Romana taking different different journeys to reach the Sahara Desert. While Romana is being used as bait by the army to get the attention of the potentially dangerous Laan, the Doctor persuades Cuthbert into giving him a lift. They don't reach the desert in time though and find Romana's helicopter in pieces on the desert floor. There is another strong cliffhanger with Cuthbert opening fire on the Laan with the Doctor and Romana caught in the middle but the problem with The Sands of Life is the Second Part of the tale.
It takes the characters in the play twenty five minutes to discover what the audience already know and the only good thing in this episode is the interaction between The Doctor and Cuthbert with the Doctor knowing how much he gets on Cuthbert's nerves and playing on it. Baker needs someone strong to act against and it is apparent that Warner is only too pleased to rise to the challenge. That said, I am interested in hearing what happens in the next part of the story, War Against the Laan.

In all honesty its not one of Big Finish's finest hours or seventy two minutes but it is by means the worst. It fits well in story terms between the sixteenth and seventeenth seasons of the show and I do believe that everyone involved in this release should be applauded.