Doctor Who: The Justice of Jalxar Review 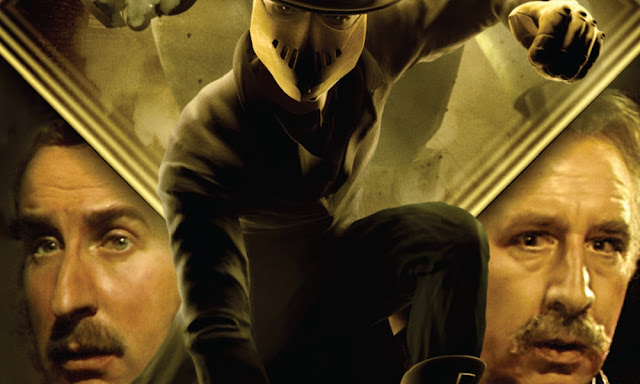 "Ah as I live and breath, Professor Litefoot and Henry Gordon Jago! I wonder I could trouble you two gentlemen for the merest jot of your time?" The Doctor

The Doctor and Romana arrive in Victorian London looking for alien technology, who can call for help but the investigators of infernal incidents themselves, Jago and Litefoot.
For the first time, The Justice of Jalxar reunites the Doctor with Jago and Litefoot in a kind of sequel to Talons of Weng-Chiang.

Its odd that, while this story is meant to be a sequel of sorts, it doesn't feel like a sequel. However that doesn't matter because I feel that this release could damn well stand on its own two feet. Its simply wonderful.
What works is that you don't have to have heard an episode from Big Finish's Doctor Who spin off, Jago and Litefoot and the inclusion of Romana immediately sets it apart from its predecessor. Jago falls for Romana and the scenes between a lovelorn Christopher Benjamin and oblivious Mary Tamm is a delight to listen to and it is the interaction between the characters that makes this story a joy to listen to. Tom Baker, Mary Tamm, Christopher Benjamin and Trevor Baxter are marvellous. However, the supporting cast have very little to do but are still brilliant as their respective characters.

Writer, John Dorney gives us some nice dialogue to listen to and some of the situations the characters find themselves in are hilarious. A particular moment is when the Doctor, Jago and Litefoot are about to be shot by a couple of members from a gang. With Dorney's writing the play is easy to visualise and easy to listen to and rattles along a great pace. The sound design from Howard Carter is superb, making it even easier to visualise even with steam powered robots!

Overall a wonderful release, a great 50 minute romp which rattles along at a great pace and doesn't drag. With a humorous script and great acting, this is a must buy release!