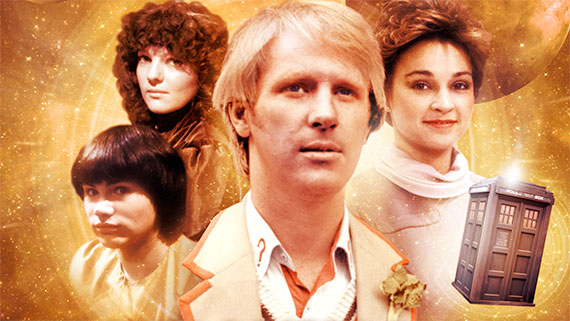 THE FIFTH DOCTOR BOXSET: PSYCHODROME AND ITERATIONS OF I 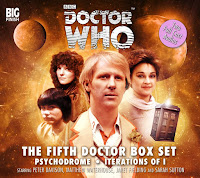 For the first time in thirty years, Big Finish have reunited the original Fifth Doctor team of Peter Davison, Janet Fielding, Sarah Sutton and Matthew Waterhouse in a special boxset release with two four part audio adventures for us to enjoy.

It's been thirty years since Adric has been heard of in the Doctor Who universe with the exception of The Boy Who Time Forgot which gives us a villainous representation of the character.
Adric is one of the marmite characters, like Mel, Dodo, Peri and Clara, you either like him or you don't, its very rare that you find any middle ground in the Doctor Who fandom around this character so the idea of bringing him back must have been risky for Big Finish. Bringing Adric back also brings yet another problem, the overcrowded TARDIS.

It was obvious that the television writers had absolutely no idea what to do with four characters so ended up side-lining one of them, for example, Adric in Castrovalva and Black Orchid and Nyssa in Kinda, The Visitation and Earthshock. So, how were Big Finish going to tackle four main characters without shoving one in prison or keeping them in the control room? 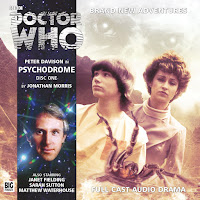 Shortly after surviving the perils of Logopolis, Castrovalva and the machinations of the Master, the new Doctor and his new crew could be forgiven for wanting to take a breather from their tour of a galaxy. But when the TARDIS lands in a strange and unsettling environment, the urge to explore is irresistible...and trouble is only a few steps away.
The world they have found themselves in is populated by a wide variety of the strangest people imaginable - a crashed spacecraft here, a monastery there, even a regal court. And not everyone they meet has their best interests at heart.
With the TARDIS stolen, and the very environment itself out to get them, the travellers face an extremely personal threat. They'll have to work as a team if they want to get out alive...but can you really trust someone you barely know?

Psychodrome begins with the characters landing in a vast and empty cavern, although it doesn't remain empty for long and is soon full of tribesmen, crashed spaceship crews, explorers, a kingdom and a monastery full of mathematicians all of whom are not unlike the TARDIS crew themselves, something which becomes more significant as the play progresses.

Written by Big Finish veteran, Jonathan Morris, perfectly recreates the developing relationships of the team after the experiences in the Castrovalva adventure. The new Doctor, Tegan, Nyssa and Adric are all trying to get used to one another by none of them is making that easy. With the Doctor and Adric leaving Nyssa and Tegan in the TARDIS they go off and explore. Tegan, outraged by being left behind takes Nyssa and the girls go and explore too. Tegan comes face to with her fears in a scene which is very reminiscent of the Kinda scenes were the Mara gradually wears her down until she gives in and allows it to take her over.

Something that Big Finish has proven that they can do is exploit the gaps between episodes and this episode takes place between Castrovalva and Four to Doomsday and this adventures is the perfect story to fill the gap allowing the listeners to find out what this team actually think about one another. 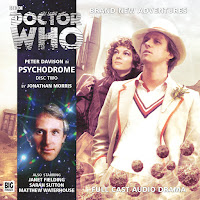 The story builds up slowly allowing the audience to discover the mystery and how the relationships between the Doctor and his companions alter the surroundings around them. This is something that has never been done before on Doctor Who and is a brand new idea which is executed fantastically. Adric's encounter with spiders like the ones from his debut stories, Full Circle. A crashed spaceship like the ship from State of Decay. A monastery like Nyssa's home in The Keeper of Traken and there are different versions of the main characters like Professor Rickett being the Doctor.

I feel that Psychodrome is about exploring and developing the brittle relationship between the characters and is a rewarding experience for the listeners. Another thing that makes Psychodrome a pleasure to listen to and it feels like those early 80's adventures. This adventure has a marvellous and hard working supporting cast, as they play more that one character, and it fits in perfectly to existing cannon. 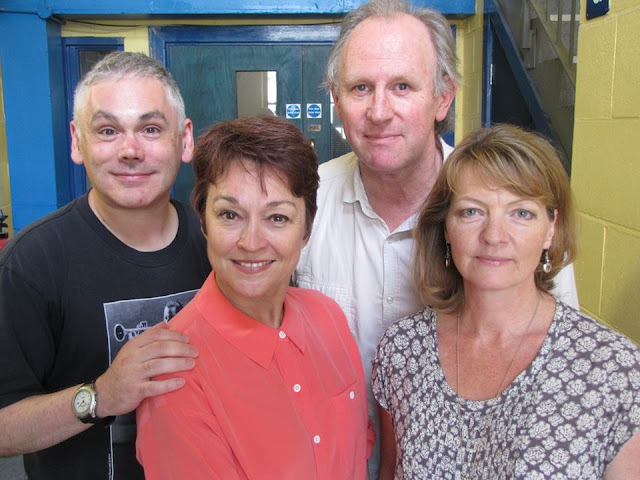 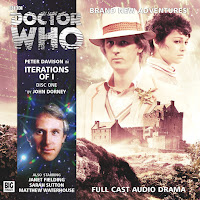 Iterations of I by John Dorney

The house of Fleming's Island had been left to rot. Ever since a strange and unexplained death soon after it was built, and plagued with troubling rumours about what lurked there, it remained empty and ignored for decades until the cult moved in. As twenty people filled its many, the eerie building seemed to be getting a new lease of life.
But now it is empty again. The cult found something in its corridors...and then vanished.
Trapped on the island one dark night, the Doctor, Tegan, Nyssa and Adric look into the building's mysteries, its stories of madness and death. Their only chance is to understand what terrible thing has been disturbed here...before it consumes them utterly. 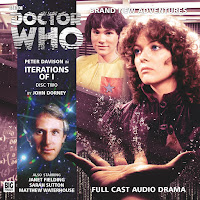 John Dorney has created an excellent story here. An abandoned haunted house located on a small island on the coast on Ireland that once housed a cult before they all vanished.
Set some time after the story Black Orchid, the crew seem more relaxed with one another and operate as a more cohesive team.
While the first adventure of this box set excelled because of the exploration of their relationships with one another, this adventure focuses around the creepy ghost story genre which hadn't been done by Big Finish in a while.

The crew soon discover the abandoned house and team up with the other new arrivals on the island a policeman with a secret, a boyfriend looking for his missing girlfriend and a father and daughter. They then begin to uncover the history of the house and discover some mysteriously functioning computers.

The Adric theme of this boxset continues in this tale with the litter I being used in Mathematics. Now, I'm not a maths expert, in fact, I can barely work out two and two so I didn't really understand how letters can all of a sudden be numbers. A life form comes from the machines and seems friendly before the group of people are attacked by a deadly predator.

John Dorney defiantly succeeds in creating a spooky story, the cliff-hanger with the repetition of the letter I is surprisingly effective. This play deserves the recent award that it was given and proves that Big Finish deserve more recognition for the work that they do. 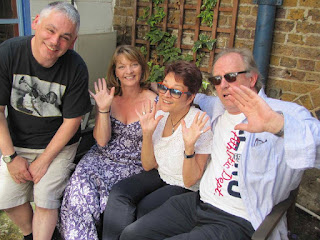 This box set is a wonderful success and it is a delight to have the Fifth Doctor and this team back on audio. Davison, Fielding and Sutton are on fantastic form as usual. I particularly enjoy listening to Fielding as she plays my all time favourite companion. I was so excited when she finally decided to come back and stay for the release Cobwebs. Waterhouse is excellent as Adric once you get used to him sounding slightly older but he recaptures the character's youthfulness perfectly.
I think that it is fair to say that the opinion on the character of Adric but hopefully this box set will cause fans to reconsider the character.

Big Finish has excelled once again and I would go so far as to say that this set is an essential release and I hope that this isn't the only release with this team.