Doctor Who: The Auntie Matter Review 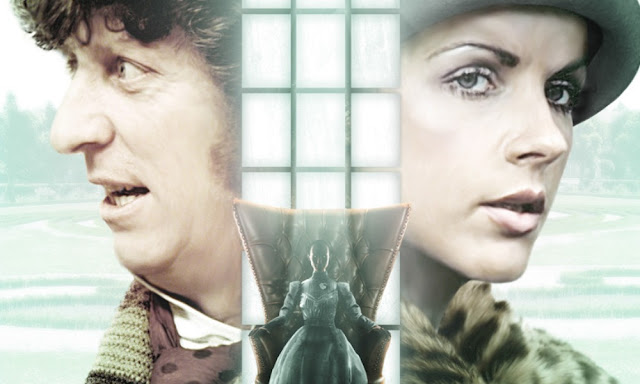 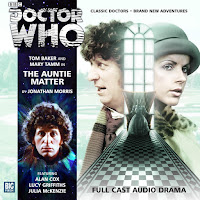 Written by Jonathan Morris, a veteran author at Big Finish, The Auntie Matter is the perfect combination of Doctor Who, Jeeves and Wooster, and Wind in the Willows. Morris has written numerous audio plays for the fourth Doctor in the range but for me, this has to be one of his best pieces of work to date. The writing is humorous and rattles along at such a pace that before you know it, its all over.

Morris states in the CD booklet that he loves P.G. Wodehouse's books, in particular, Jeeves and Wooster and while I have never read anything by Wodehouse, the play has a 20's feel about it and has to be one of the funniest Doctor Who audio adventures ever.

This play has strong direction from Ken Bentley, someone who can be relied upon to give us a cracking good story. Bentley directs well with any TARDIS team, in particular the Fifth Doctor team. This strong direction results in a story that doesn't drag anywhere through the 60 minute duration. Well done.

This story makes good use of the Doctor and Romana being separated early on giving each of them plenty to do. Romana is whisked away by Reggie, a man she meets in a bookshop and under orders from his mysterious Aunt to find himself a wife. You can imagine Romana's reaction when she discovers this plan. She isn't best impressed. The Doctor asks a young maid Mabel who works in the house he and Romana are lodged in to accompany him to Bassett Hall where they too meet the mysterious Aunt.

The Aunt, wonderfully played by Julia McKenzie, 'Miss Marple', is a very formidable woman and incredibly menacing on audio. She turns out to be the last survivor of an alien world ravaged by plague who is trying to keep herself alive. It is interesting to hear the Doctor's views on this topic as it changes completely when he is the last of his kind when the show returned in 2005. With everything tied up The Doctor and Romana, still unaware that they were both at the Hall make their way back to London where they both tell one another of their recent adventures.


Robert Portal definatly succeeds at convincing us that Reggie is a rich, inept, aristocrat who has been spoilt all his life with an eye for the ladies all be it from under the eyes of his Aunt. Alan Cox is great at playing the polite villain, Grenville but takes a sinister turn when we hear the revelation that he is an android and Lucy Griffiths works wonderfully as this stories, 'companion', Mabel.

Tom Baker clearly relishes this story and it is easy to imagine him driving through the country with his scarf flapping behind him like a mad Toad of Toad Hall.

However this story and the whole series is clearly a tribute to the late, great Mary Tamm who died shortly after completing this series and these audio adventures in a way immortalise her as we can listen to her playing Romana as many times as we want.

Overall, a wonderful release with a lot to enjoy. I do feel though, with the quality of stories being made by Big Finish, The Auntie Matter might be destined to become a hidden gem which is a shame because there is a lot to enjoy here...
1979 Audio Audiobook Audiodrama Audioreview Big Finish Doctor Who Mary Tamm Romana The Fourth Doctor Tom Baker