Doctor Who: Terror of the Sontarans Review 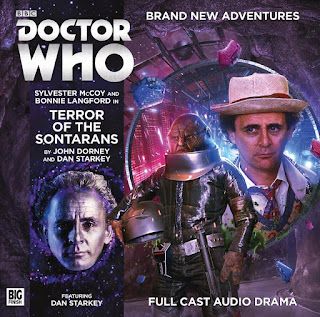 After they receive a distress call, the Seventh Doctor and Mel arrive at an abandoned and derelict mining planet which not too long after their arrival gets overrun with a Sontaran battle fleet who are searching for their missing research team and as they begin to find the answers, strange occurrences begin to develop on the planet below.

Since their revival in 2008, the Sontarans, while still war hungry brutes, have become more and more comedic and then absent since the creation of Strax and his continuing adventures with the Paternoster Gang. Here we hear the Sontarans doing what they do best, being nasty, brutish and short.
One of the stories strengths comes from the fact that it is co-written by Dan Starkey, who portrays Strax and is someone who knows the Sontaran's inside and out. He doesn't make each Sontaran sound completely identical like they do in the new series and he instead goes for the raspy, chilling voice originally created by the original Sontaran actor, Kevin Lindsey and there are definitely flashes of Lindsey's voice in Starkey's portrayal of the Sontarans.

Despite the title, the Sontarans aren't the only threat in this story, the new monster feels unique but also feels like we have seen the concept before. The story feels like an 80's story and it is fun and engaging, its not quite up to the standard that other recent Big Finish, Who releases and it falls into the old age Doctor Who problem of the ending feeling rushed and a flat.

Sylvester McCoy brings the same gravitas to his incarnation of the Doctor and Bonnie Langford always engages despite being underused in this story with both Daniel O'Meara and Andree Bernard being solid supporting cast members.

Terror of the Sontarans has a good mixture of both old and new and offers us a good demonstration of why the Sontarans are just a classic monster as the Daleks and the Cybermen.

While the story isn't spectacular, it is an enjoyable story that gives us another good adventure with the Seventh Doctor and Mel.