Doctor Who: Domain of the Voord Review 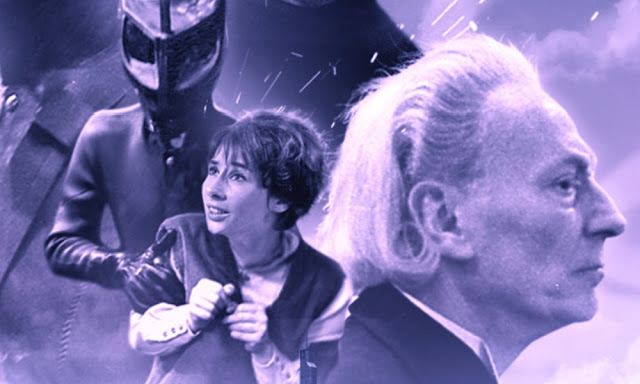 "You will discover what it means to be Voord..." Tarlak

Following on from what appeared to be the demise of the Companion Chronicles, Domain of the Voord launched a new series of audio adventures for the early doctors in The Early Adventures. The Companion Chronicles was a highly successful and popular range for Big Finish so it was always known that The Early Adventures would have some big boots to fill and it nearly succeeds. Nearly.

It is perhaps an odd choice that the first monster that has been brought back for this range isn't a famous one. The Voord appeared in one televised story and were devised to eventually become as popular as the Daleks. Unfortunatly, the rubber suits and flippers didn't succeed and they never appeared again and have gone down with a 'remember them' attitude.
But here is a sequel story with the TARDIS landing on the planet Hydra among a fleet of battleships and the TARDIS crew soon discover that the fleet is being picked off one by one by the Voord. When the Doctor and Barbara missing, Susan and Ian face life without them, life in a world that has become part of the Voord's domain.

As with many Big Finish releases, there are many aspects in the stories that I enjoy. In particular, Domain focuses around Ian and Susan having to face life on this planet with no hope of ever travelling through time and space again something that would have been really dramatic if more time had been spent on the topic because the story doesn't do anything with it. Their reactions to the thought that The Doctor and Barbara being dead could have been better on the script front. There is one particularly good scene which seems like business as usual with Ian rounding up some resistance and Susan doing something foolish and the drama could have focused around the devolvement of their characters relationship but it doesn't and that is a shame as this story would be the prime time to attempt something along those lines.

We do learn a little bit more about the Voord in this play but we are left questioning whether any of it is that interesting. Again, there are some good concepts focused around the Voord but the story doesn't really exploit them which is another shame because that would have been another element that would have made this story fantastic. Instead, what we end up with is another Aliens invading a planet while the TARDIS team tries to raise some resistance to stop them story stretched over four episodes when this story could have been told in less than that.

William Russell and Carole Ann Ford are marvellous as old companions Ian and Barbara and Russell is particularly good at recreating the voice of William Hartnell's Doctor but I'm not sure if it is down to the narration but the story does feel a little stilted throughout and I don't know what aspect of the production makes this story a little off-putting.

The story isn't helped by including boring supporting characters with very little characterisation who do little to make the story progress. There aren't any characters that are particularly memorable in this play.

The sound design though is wonderful, successfully recreating the sound of creaking boat timbers and the entire soundscape really captivates. I think that Toby Hrycek Robinson's design really sounds like something from the Hartnell era and he should be rewarded for the wonderful overall sound of this play.

Overall though, this is a decent Who tale but perhaps not one for people trying to get into these audiobooks.

I am happy to see that Big Finish will continue to make Hartnell stories and this release really does try to fill some particularly big boots and nearly succeeds.