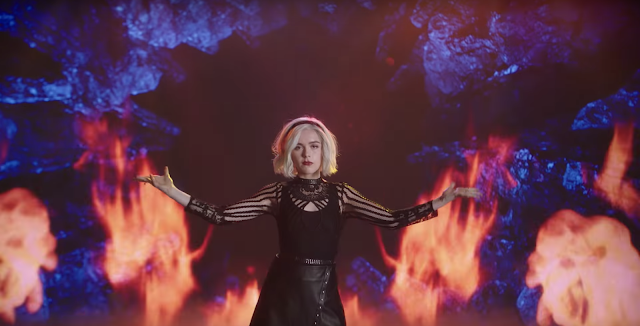 With the first two seasons of Netflix's hit, The Chilling Adventures of Sabrina being nothing short of excellent, Part 3, while still excellent shows how the series has reached that part in every television teenagers life when musical-interludes are the go-to time filler. Should we be worried. No. Part 3 was every bit as excellent as the first three seasons, but what was once a great horror television series is now showing its inner Riverdale...

Like I said, Part 3 was every bit as excellent as the first two parts, though this time, it does seem a little more focused on style over substance and with Sabrina and Roz joining the cheerleading squad, it allows the show to relax a little with some musical moments. One can't help but wonder though if these moments are thrown into the mix for no other reason than the cast are incredibly talented and like Riverdale does sometimes, these musical interludes are often used to advance the plot here. My favourite being when the coven uses the cheerleader's energies to restore their abilities to cast spells. 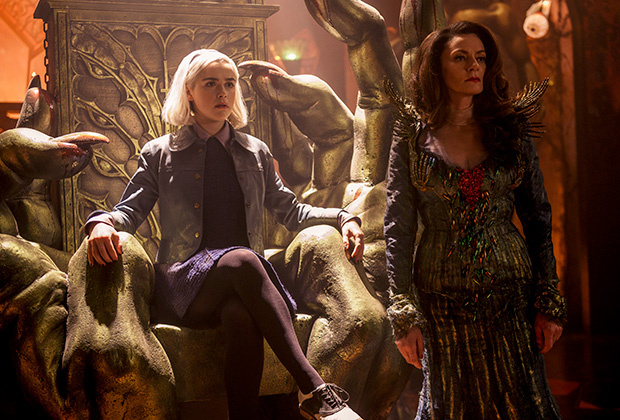 That is actually one of the least strange moments of this series as Sabrina and the Coven have to face off against a group of ancient Pagans who are trying to bring the mythological Green Man to Earth, turning the residents of Greendale into green zombies. And then Sabrina has to battle for the throne of Hell against a handsome man made of clay, and an internal fight between Lucifer and her boyfriend Nick. Oddly though, this still isn't as crazy as Riverdale has been sometimes!

I actually found Part 3 to be the most consistent of the three series. Part 1 struggled with the real world it was trying to play around with, Part 2 had plenty of fun ideas but struggled to go anywhere with them, but Part 3 bridges the gap between the two and blends the magical side and real life side of the show in a great way.

For me, Sabrina's friends have always been more interesting to me than her Coven associates and they add another member to the group with Robin's new love interest, Theo, a Pagan hobgoblin. Roz gets a lot more to here, not only with her psychic powers but also with her joining the cheerleading squad. It's Harvey who still suffers here, but at least he gets some good writing this time around, actually getting to put the hero-hat on.

While I don't find them as interesting, maybe because I don't find them particularly likeable, the Witches are still the strongest thing in this series and it was interesting to see their egos take a knock with their powers waning because of the capture of Lucifer. Zelda goes on an interesting personal journey as she tries to discover a new source for the Coven and Miss Wardwell, in a double performance from the ever-brilliant, Michelle Gomez, struggles to deal with life back in Greendale now that Lilith has finished with Baxter High. 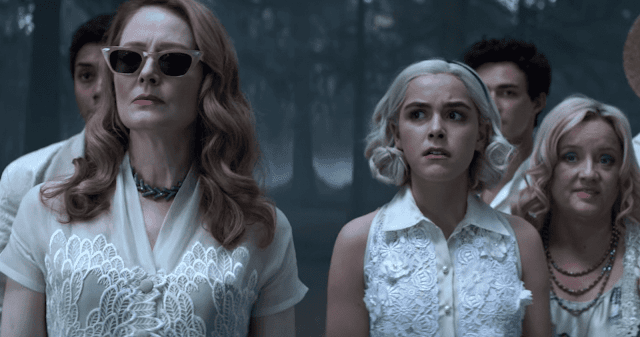 It's a great moment when the Coven gets their magic back, with Zelda and the school now worshipping Hecate and they take the fight to the Pagans and manage to stop the Green Man from taking over the world. What's even more brilliant is seeing Zelda except the chemistry between her and Mambo Marie, a Voodoo Priestess and joins the Coven and I'm looking forward to seeing these women in the next series.

The Spellman family are thrown through the wringer too as Hilda is turned into a Spider-Woman and nearly eats her fiancé, Mr. Cee and Ambrose starts the series off close with Prudence but is pushed away when she blames his mercy for the death of her sister Dorcas at the end of the series. And then there is Sabrina who suddenly finds herself leading a double life.

All through Part 3, the use of time-travel was hinted at and the final episodes, sees a future Sabrina rescuing herself from Caliban's trap when her and her surviving friends find a way of casting a time-travelling spell. The final two-episodes were a great watch as we watched almost every character bite the bullet in shocking ways, but that finally allows Sabrina to use her powers to their fullest extent. And now that there are two Sabrina's she's solved the problem of how she can be in two places at once. The future Sabrina becomes the Queen of Hell while the younger Sabrina finally gets to live the life she's wanted with her friends. It all seems like its been wrapped up in a tight little bow, but with so many paradoxes now at play, it'll only be a matter of time before everything goes wrong.

With two Sabrina's, time-travel and Father Blackwood unleashing an unknown terror into Greendale in the final episode, Part 4 can't come soon enough and it seems like its going to get even crazier!