Following on the Nightwing rebirth story-arc and with Dick Grayson now solidly back in Bludhaven, the third volume of stories, Nightwing Must Die, sees Dick's life back in full swing. Over the course of the issues collected here, we get apparences from the stuck up Damian Wayne and Dick's girlfriend, Shawn Tsang as fights with villains like Deathwing and Dr. Simon Hurt.

For fans of Grant Morrison's run of Batman, when Dick took up the mantle following the supposed death of Bruce Wayne, the bulk of this book gives us a huge nostalgia hit with the teaming up of Dick Grayson once again with Damian Wayne as they try to discover who kidnapped Shawn Tsang. I've never been a fan of Damian Wayne, he is arrogant beyond belief and how anyone can be a fan of his is beyond me. What doesn't help here is that Damian is constantly reminding us that he believes he is the rightful heir to Bruce Wayne's Batman cowl. I don't think he is but he and author Tim Seeley seem happy to keep reminding us of it. Seeley also doesn't have too great a handle on Damian, rather than making him interesting and somewhat tolerable, for me, all Damian still comes across as is a stuck up brat.

Luckily though, Dick comes across much better and isn't as moody here as he was in the first two volumes, mainly thanks to the fact he has finally settled down in his new life. Seeley makes sure to give Nightwing some great heroic moments and funny one-liners that have always managed to rightfully set him apart from the rest of the Bat-Family, all of whom are dark and brooding. Very early on in his writing of the character, Seeley seemed to grasp what makes Dick tick and managed to grasp what it was the people love so much about his character. Also helping was the removed focus on Tsang, who, while she does form the backbone of the book, doesn't feature as heavily as she does in the previous volumes, giving Nightwing much more time to shine. 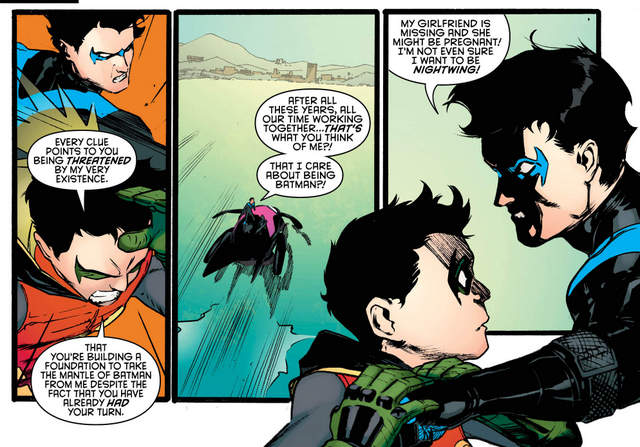 The previous two volumes certainly weren't particularly dark or moody but Nightwing Must Die does have a darker edge to it, probably down to its villains and does have some quite high-stakes. For me, the standout villain here was Deathwing, whose backstory was surprisingly tragic and made you really feel for him and Seeley has clearly given some thought to the character. As normal, Pyg and Simon Hurt where more filler villains and I'm not sure how much sense it made for Seeley to make Dick and Damien travel around the world after Shawn when they eventually traced her back to Bludhaven and the action could have quite easily taken place in that location.

However, the artwork was brilliant here, the rougher edges and stray lines all adding to the higher stakes of the story, as well as contributing heavily to the much more dangerous look to Deathwing.

The book rounds out with a one-shot issue focusing on Nightwing and Flash enjoying a night out. But it quickly becomes a race against time to stop a gang using a strange weapon that has been teased across all three volumes of the series so far. It's another nostalgia hit for fans who loved Nightwing and Kid-Flash in the old  Teen Titan comics.

Nightwing Must Die is another solid entry into the Nightwing mythos, even if Damian Wayne did get on my nerves! While the writing does feel a little uneven at times what author Tim Seeley should be highly praised for is how he's managed to give as a Dick Grayson that we can all love, playing with made the character so enjoyable in the first place.