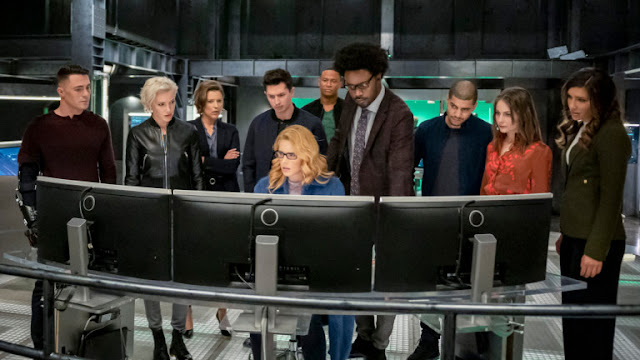 Well, this is it. The final episode of Arrow. It's a sad review to write for a couple of reasons. I've always loved this show and been there through its highs and lows and its clear how much the cast loved the show. But it also feels like we're all saying goodbye to something we all really cared about. I don't think there has ever been a finale of any show that has been pitch-perfect, and while I would have liked a little more, Fadeout is a nice way to round the series out, with the promise of some massive things to come!

Right off the bat, the show makes it clear the sort of things that have now changed. Moira, Tommy, Emiko and Quinten are alive again, a gift from Oliver when he rebooted the universe, as well as a large drop in crime in Star City.

Out of the whole cast of characters this series has had, the only two characters who remained dead where Earth-1 Laurel and Robert Queen, mainly because Robert Queen's death was the reason Oliver went down this path of becoming a hero and Laurel was replaced with her Earth-2 counterpart and there wasn't anything to fix as she has grown into a fitting replacement for the now deceased Earth-1 counterpart.

Alongside seeing the new and improved Star City, we get another treat in an unseen mission set sometime during the show's first season. It also served as a nice reminder of just how far Oliver came over the course of eight seasons. Series 1 Oliver murdered his way through his father's list, while Series 8 Oliver had to deal with cosmic entities and universal threats. But it was nice to see Oliver go back to basics, beating up the bad-guys and crossing out names. 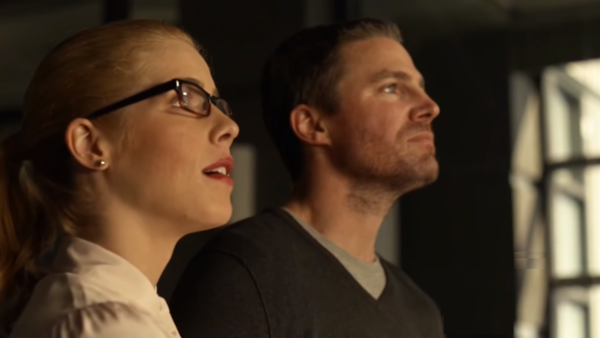 In looking back, the showrunners also took the time to look forward. Thea and Roy got engaged, Rene became Mayor of Star City. Dinah doesn't know it, but she's on her way to 2040, and Diggle and Lyla have moved to Metropolis for Lyla's promotion, though Diggle soon sees a meteorite crash and finds a Green Lantern ring! I'm really hoping that he gets his own show!

And if that wasn't enough, they managed to fit in one last mission for everyone following the kidnap of the young William. The whole team did Oliver proud, even Rory and his alter-ego Ragman, returned to help out. While this mission was certainly the weakest element of the episode, it represented what Arrow does best, putting the focus on the characters.

By now, endangering William is an old trick, he's been kidnapped and tied-up more times than Daphne and it did feel like overkill for everyone to be involved in finding him, but it was nice to see the cast getting to don their costumes for the last time. In the flashback sequences we see Oliver give mercy to a human-trafficker, the same man who would kidnap William, and in the final showdown between Mia and the kidnapper, we have to wonder if Oliver's act of mercy was the right one. Was Mia right to let him go back to prison or should she have killed him? I guess we might never find out, but Arrow always at its best when it worked in a morally grey area.

The funeral scene at the very end was quite sad and it was nice to see that virtually everyone turned up, even Barry and Kara. I know some fans and viewers complained that bringing back Moira, Tommy and Emiko ruined Oliver's overall redemption arc, but I really like that they are back and it does feel entirely in keeping with Oliver's character that he would want to sacrifice himself to bring them all back.

Did I want more, well yes. Could more have been done, well yes. I think had the previous episode been done earlier in the season, we could have had a nice two-part finale, allowing for a lot more things to be developed. However, this entire final season was a love letter to the fans and almost everyone who ever played anyone came back in some shape or form. As a finale, it might not have wholly succeeded but it was a very fitting end for Arrow. We'll miss it.
Arrow Comic Books Comicbook Comics DC Comics superheroes