And Soon the Darkness 1971 - Movie Review 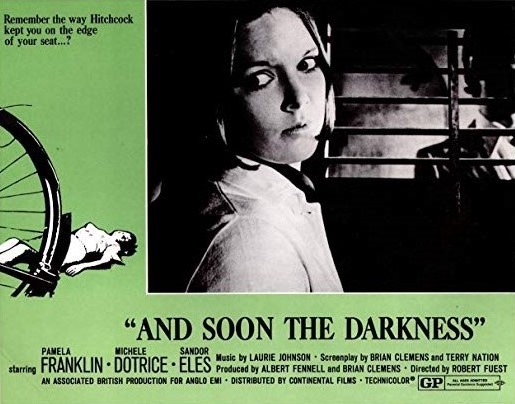 And Soon the Darkness has a strange origin. Following the cancellation of The Avengers, the campy but brilliant 60s television series which introduced us to John Steed, Cathy Gale, Emma Peel and Tara King, the production crew were at a lost end. They were still working together, Brain Clemens and Terry Nation, the man who created the Daleks, decided to write one final piece together. So working with director, Robert Fuest, producer, Albert Fennell, who had also worked on The Avengers and Avengers soundtrack creator Laurie Johnson, they created this rather creepy and sadly largely forgotten thriller.

That's the other thing about And Soon the Darkness. Many people label it a horror, and its premise of two swinging-sixties girls going on a cycling holiday around the back towns and villages of France and then one goes missing, has its feet in the horror genre. But what transpires is much more human, a tense thriller where our 'final-girl' Jane, played by Pamela Franklin can't trust anyone and thanks to a language barrier, can't get anyone to help her.

The setting of rural France looks stunning and for all the open fields we see here, the world surrounding Jane feels very claustrophobic, thanks to the almost empty roads and villages they travel too. It doesn't take the girls long to have a little falling out. Jane wants to continue travelling the country while her friend, Cathy, played by Michele Dotrice, wants to relax, sunbathe and take things at a much more leisurely pace. Jane decides to go and leaves Cathy, with every intention to go back for her when she's calmed down. Heading back to the woods she left her friend, Jane finds it empty, Cathy's belonging strewn throughout the forest. Of course her first suspect is the strange man who has been keeping his eye on them, It doesn't take long for things to go sideways as Jane finds herself in the web of a strange man and a few interesting and exciting twists that keep things exciting.

With the exception of the opening thirty-minutes which slow-burn-setups the rest of the film, I would happily say this was a forgotten English gem. I think with the performances from the two leads, Franklin and the Stranger, played by Sandor Eles, were excellent and its visually stunning. The camera opting for wide visuals that really help hammer home how alone Jane is, even though she out in the open air. Its a thing that films have often done to great effect, look at The Wicker Man to see how being surrounded by beautiful nature can quickly feel dangerous. And Soon the Darkness does the same sort of thing and the laid back attitudes of the police and the isolated feel of Jane, especially when the question rises of whether she killed her friend, instantly reminds a modern audience of Madeline McCann's disappearance years ago.

And Clemens and Nation make sure that the script isn't left behind, giving us a Agatha Christie whodunit, where we aren't sure who we can trust. I will admit to being wrong footed about who the killer here is and the ultimate reveal comes across all the better for it and it keeps that sense of unease right up until the very end. I've not seen the 2010 version, and I don't think I want too. This was a great movie, so why spoil the experience!