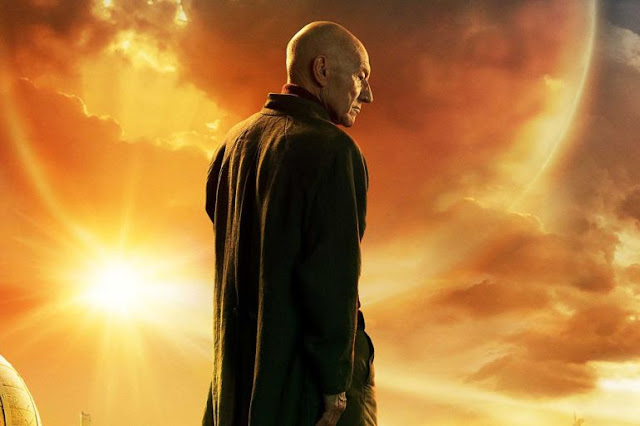 For me, following on from the success of Star Trek Discovery, Picard came a little out of the blue. The Next Generation is such a beloved show, not only in the Star Trek franchise but also in the wider sci-fi genre. So Picard had a lot to live up too. Not only carrying on the legacy of TNG, but also making sure that it stood apart from it, luckily Patrick Stewart is just the sort of person to make sure the show does just that.

And that is apparent in the very opening minutes. Many people will always comment that Patrick Stewart doesn't age, and while he seems to do it very slowly, he does age and as a result he isn't capable anymore of doing all the things he used to do in TNG as well as the more action-hero Picard of the TNG movies from Generations to Nemesis. But this show doesn't expect the character to be doing all those sorts of things, Remembrance instead lets you know that its okay that this character can't do those things and its alright to let the younger Picard go.

For all the years that Picard has gotten older, he has still stayed the same man we've always known. He still knows right from wrong, when its time to take action or a stand and when its not and that aspect of the character is front and centre of this episode when he meets the strange Dahj, played by Isa Briones, whose world has quickly come crashing down around her. Picard is incredibly kind to her and agrees to help her, following a home invasion where her boyfriend was killed and something in her mind was activated. If it had been me though and I was the kind of celebrity that Picard is, I would be incredibly wary of anyone who had just turned up on my property! Luckily though Picard is a good judge of character, as is his dog, Number One. 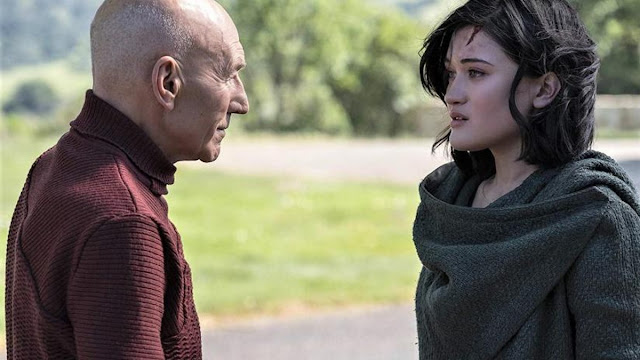 There seems to be some kind of connection between Picard and Dahj though and it doesn't take long before Picard learns that this connection is his old friend, the departed Commander Data. As the episode rattles along, Dahj and Picard learn that she seems to be a new type of android and has been cloned from the remains of Data. Data, once again played by Brent Spiner, looms large over this episode as Picard has a number of dream sequences where his old friend shows him a painting, one that seems to foreshadow Dahj's arrival and creation.

As the mystery deepens, Picard and Dahj find themselves in the Daystrom Institute and its great to finally see things that were only ever mentioned during the original run of series from The Next Generation to Voyager. Picard meets Dr. Agnes Jurati, played by Alison Pill, and quickly we are getting an idea of who the crew of the new ship is going to be later in the series. There she tells us that the technology to make new androids like Dahj was under construction when the project was terminated following the attack on Mars following a synthetic rebellion. No one knows why the attack on the Utopia Planitia Shipyard occurred, just that the androids came from the Daystrom Institute. It was this attack that also meant that Starfleet withdrew from its galactic presence and thus couldn't help the refugees from the destroyed Romulus, an action Picard didn't agree with and so left. The destruction of Romulus also seems to link the 2009 Chris Pine movie to the main Star Trek universe which is cool!

As the episode winds down, we learn a few key things. The man responsible for creating the new androids, Bruce Maddox has vanished and is believed to be dead. Maddox used a positronic neuron from Data to create Dahj and that these new androids always come in pairs. Somewhere Dahj has a twin, thus creating the mystery for Picard and his rapidly assembling crew to solve. 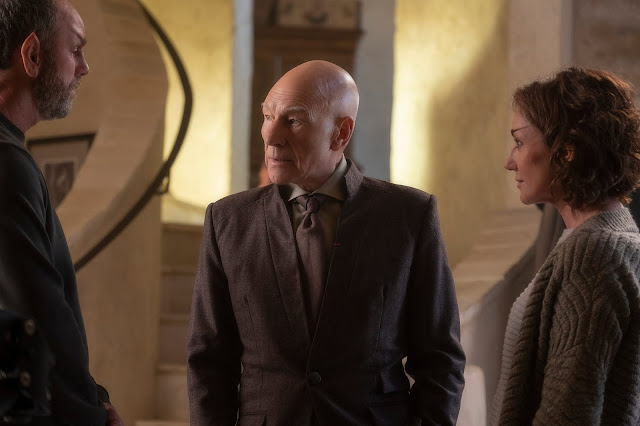 Then as quickly as we knew her, Dahj is killed in an attack from a rogue group of Romulans, who we learn more about in the next episode. But these Romulans come and go quickly as when the police arrive, they only find an unconscious Picard.

Just before the exciting opening episode closes though we meet Dahj's twin, Soji Asha as well as a mysterious Romulan gentleman, Narek, played by Harry Treadaway. Both of them currently reside inside a Romulan sanctuary, following the destruction of Romulas which seems to be based inside a Borg Cube! Yep, a Borg Cube! I've seen enough Star Trek over the years to know that when the Borg are involved in any-way-shape-or-form, that things aren't going to end well! Especially as Picard has a special connection to the Collective!

All of this episode was designed to ease a brand new audience into the world of Jean-Luc Picard and The Next Generation. But for us old fans, we've got plenty to get our teeth into, a mystery worthy of TNG, references to Deep Space Nine, Voyager and all the other Star Trek instalments and the mighty Patrick Stewart back again! But with the promise of the Romulans, Borg and the inclusion later on of two escaped Borg members, Hugh and Seven of Nine, I can't wait to see where this series boldly goes!