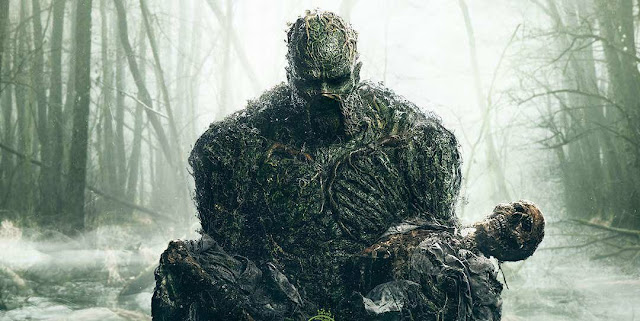 Back in 2018 when DC announced they were creating their own streaming platform, the announcement of a live action Swamp Thing came late into the game, following the announcements of Titans, Doom Patrol and an animated Harley Quinn series. But for us English fans, DC Entertainment never came out over here and instead, we had to wait to enjoy Titans on Netflix and now, Swamp Thing on Amazon Prime with no sign of Doom Patrol coming out over here as of yet.

Also, before the Pilot of this series was aired, it was announced that the series had been cancelled due to monetary problems, something too complicated to explain here. So it seems strange to watch a series that I know is going to end with Season 1. But I thought I would give it a go nevertheless.

While there may have been some glitches in the production stage of making the show, I was impressed overall, and nothing suggests that those glitches affected the production in the end. Right off the bat, I was impressed and surprised by how gory and violent this show was. I know Titans had its moments but this seemed to be something else entirely. While I might seem morbid to say that the violence in here was good, it shows that Swamp Thing isn't afraid to take risks. Unlike anything The CW is airing, this is a show that features some very dark material and with it in the hands of acclaimed horror-director, James Wan, who serves as an executive producer, it feels like its in good hands.

The story focuses around botanist Alec Holland and his transformation into the titular Swamp Thing. I've got no real knowledge on the character beyond the fact that he comes from a swamp in Louisiana, so it was nice to get a lot of backstory here before he meets his iconic fate at the end of the episode.

I was very impressed with the costume here too. Sometimes monsters from comic books don't translate too well into a live-action format very well, often looking cheap and like a person in a big costume or CGI. But here, thanks to a stunning costume from the production team, the setting which doesn't allow for a lot light and a brilliant performance and attention to detail, Swamp Thing looks as scary as possible!

We're also introduced to Abby Arcane, played by Crystal Reed, who works for the CDC and finds herself reassigned from Africa where an outbreak of haemorrhage-fever is now under control, to her hometown of Marias where a strange illness is sweeping across its inhabitants. Many of the inhabitants of the little town are concerned as to whether the illness will ruin their businesses and after something of a hectic start to the episode, things quieten down and allow the strange and mystical aspects of the comic-book to take over.

It doesn't take the episode long to unite Abby and Alec, played by Andy Bean, where they begin to investigate the cause of the illness. And we get one of the best moments of the episode when in a morgue, a dead body begins to move around in a sequence akin to The Thing. It was a fantastic moment, that actually unnerved me, someone who has seen a lot of horror films and isn't really bothered by them. So well done to the production team for managing that!

In many ways, Swamp Thing feels as dark as NBC's Hannibal, one of the darkest television shows to come out in the past few years and the combination of colours, CGI and VFXs, blend superbly well and I hope the standard set here continues throughout the course of the season.

The Pilot episode managed to tick all the right boxes for me. It was dark and scary, light and humorous and kept me interested and invested in what was happening at all times. I loved the chemistry between the two main characters and look forward to seeing where the pair will be going from here. Hopefully the excitement from the first episode will continue throughout the course of the one and only season.