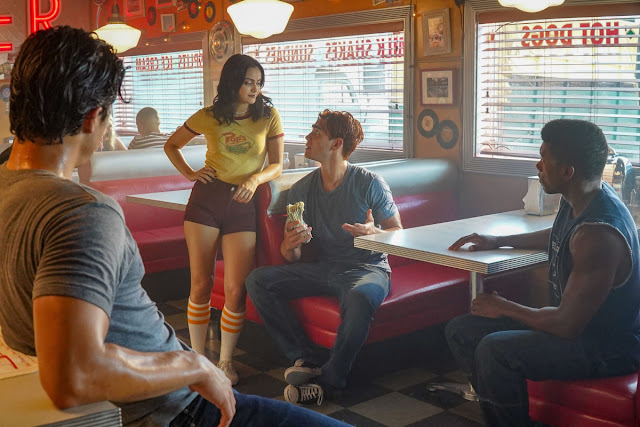 Someone once said that there was no right way to tell a story. And in Riverdale's case, I'd say that was right, over the course of the sixty-something episodes we've been treated too so far, its the inconsistency of the storytelling that has become appealing. Sometimes it works as an appealing guilty pleasure while at others it seems to unravel everything that's come before in favour of a shock or twist that doesn't then up working. Indeed, this series so far has set things up that may or may not pay off later down the line with Jughead having joined a strange new school, a decision where, if we're all thinking rightly, might just lead to his doom.

In theory, Jughead will survive all the challenges he has ahead of him, because Cole Sprouse has been one of the breakout stars of this series so far. However, I do hope that the writers keep the characters going down an interesting route like this. With the death of Luke Perry and the farm having been dealt with and this third episode dealing with the plot-line of The Farm, a new status quo seems to have been set up and a brand new storyline has now been set into motion.

As I said above, this episode deals with the demise of The Farm, the crazy cult that turned out to be a bunch of organ-harvesters. This episode though does have The Farm 2.0 with Edgar, the crazed leader having holed all the members up into an abandoned motel, and is getting desperate. He has discovered that Betty's mother, Alice, is an undercover FBI agent and sends Betty's sister, Polly out into Riverdale with a deadly purpose. But the FBI have no way of handling any of this so Betty takes it upon herself to save her sister and rescue her mum. These are the kind of crazy storylines that I love about Riverdale! 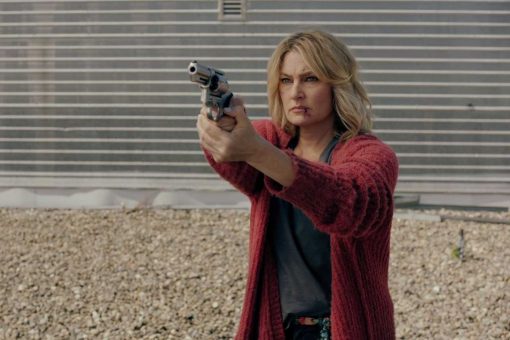 Having disarmed a bomb with a hairpin, Betty proves herself to be more useful than an entire group of FBI field agents and stages a one-woman army attack on the Farm thanks to some Glamorege Eggs from Veronica, some forged passports from Toni and some serious grand-theft-auto!

Of course this being Riverdale it turns out to be a trap but Betty and Alice turn the tables and escape and while Betty gets everyone onto a bus before the FBI arrive and start to shoot-the-place-up, Alice takes it upon herself to follow Edgar, who we meet getting ready to literally fly away in a home-made rocket, dressed up like Eddie the Eagle! To his credit Chad-Michael Murray helps the serialism of this stick but its still a strange costume choice, no matter how insane Edgar might be! But before he can pull out a gun, Alice shoots him and he dies.

But how much did we know about Edgar or the Farm anyway? If we think about it, we still don't know what their real motives were or why they were doing what they did. Hopefully Riverdale isn't done with them and we'll get a few more episodes that really explores what they were about otherwise they're going to be one more pointless wheel-exercise that Riverdale does seem to excel at, at this point!

With Jughead away at his new school, where he has already started to have problems and we've been reintroduced to Moose, and Betty taking down an entire organisation single-handed, Veronica, Archie and Mad Dog have problems of their own, in particular how they are going to keep the boxing gym open and the drug gangs that have taken over the underworld of Riverdale. And then there is poor Cheryl who wants to keep the fact she has her dead-brother's body in the basement a secret and then Toni finds out. What is it they say about 'The Best Laid Plans of Mice and Men'?

Desperate to raise cash, Veronica, Archie, Reggie and Mad Dog host a car-wash with shirtless men. They raise a tone of cash, not enough that they needed though but the quest to give the kids of Riverdale a safe place to hang-out leads Archie on a vigilante crusade against some of the drug dealers in town. I'm expecting those characters to return at some point.

And this is another episode that shows us how daft Archie is. Veronica has offered the money they need and he declines, instead deciding to take it from the dealers and gangs. However with Archie's mother staying around for the foreseeable future and Veronica having secretly paid for the work to be done, I can't wait to see what illegal ways Archie and the gang can come up with when dealing with the now-stolen money Archie has!

Oh Riverdale, it's good to be back!