Doctor Who: The Game - Review 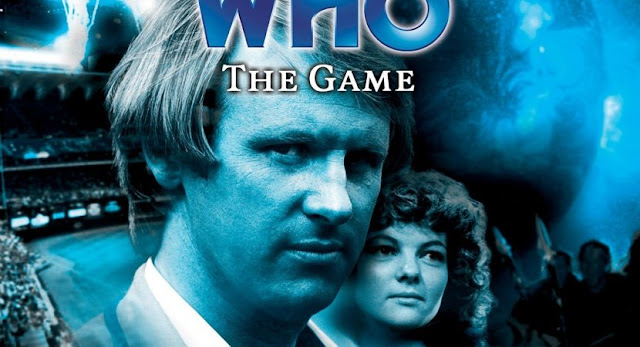 The Fifth Doctor is a great athlete. But the events in this story just aren't his particular game.

The Doctor decides to take Nyssa on holiday to the planet Cray, where the game of Naxy is all the rage. But before they know it, the Doctor is swept up in the game and Nyssa is up to her nose in the planet's politics. Befriending an old friend of the Doctor's Lord Darzil Carlisle, played by Doctor Who alum, William Russell, who has come to Cray to tidy up some diplomatic problems. But there are problems afoot with his attempts to stop the game of Naxy could mean the life or death of the contestants including the Doctor.

I really enjoyed this story, even though I wasn't expecting to do so, even if I wasn't sold on the villain in the end. The game scenes with their 80s music and sports commentary sound like real sport broadcasts, and there is some great action sequences as the Doctor some fine speech making and has some moments of great courage.

In continuity terms this story takes place with the Doctor and Nyssa having been travelling together for a long time and their friendship has developed nicely. They tease and mock one-another but they will do anything for one another. But Nyssa isn't just the Doctor's companion, she never was, she has her own mind and will do her own things, like we heard in Spare Parts, often placing her at odds with the Doctor. Nyssa's relationship with Lord Carlisle is a perfect case in point. Dealing with the Doctor has taught her how to deal with Carlisle. And the Doctor has a rather unique relationship with Carlisle that results in some rather nice and touching scenes.

At the time this story was released, Big Finish hadn't managed to bring Tom Baker into the fold or any of the older surviving actors, and they haven't figured out how to bring in those classic companions. Instead Big Finish decided to bring Anneke Wills into the main range as Charley Pollard's mother, Deborah Watling as Auntie in Three's A Crowd and in this story, William Russell as Carlisle. While it is nice to hear these actors back in their original roles but it is also nice to hear what they can do with new roles. And this is a great example of this with Russell giving so much to the role, he makes the audio something more than it might have been otherwise.

And if you are a fan of real-life-sport then you will probably get more out of this storyline than others as it is an entertaining satire of the sporting community. There are athletes and coaches who sound like real-world personalities, and there is some commentary on the slightly seedier side of the sporting culture. As a result some listeners might not get as much out of this story as others.

The only real let-down with this story is the clichéd villain who isn't really all that bad but is used in the wrong way. And Faye's actress is rather stilted and not up to the material as much as the rest of the cast. But despite some minor quibbles, The Game is a rather overlooked entry into the main Doctor Who range...