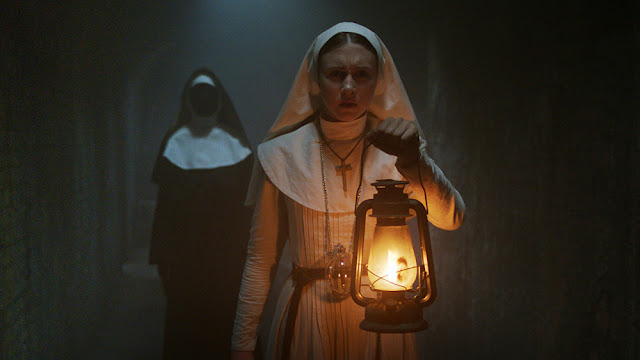 It is somewhere around the half-hour mark when The Nun makes you wonder if it is playing things out as a homage to those fantastic slow-burning horror movies from Hammer Horror and Mario Bava that we can enjoy from the 1950/60s. However, it doesn't take long before you will realise that any similarities to these movies are purely superficial. For a while The Nun seems happy to take place in a crumbling nunnery in the outback of Romania with graveyards, fog, rain and a murder of crows. Then the whole thing grabs a kind of kitchen-sink feel and the whole piece is worse off for it.

Credited writer, Gary Dauberman, who had previously penned It: Chapter One and Annabelle: Creation is responsible for the heavy handed dialogue and failed comic relief moments and some long scenes with heavy exposition. The comic relief mainly comes from character, Frenchie, played by Jonas Bloquet, a French-Canadian farmer who is living in Romania for reasons that are even inexplicable to him. He is also one of those characters who seem to know that they are there to lighten the tone of a film as well as giving the other characters an English-speaking character in the rural Romania landscape. And he's a handy sidekick to have in your corner when the troubled Father Burke, played by Demian Bichir and naïve Sister Irene, played by Taissa Farmiga find themselves in some real trouble.

The circumstances which see Father Burke and Sister Irene having to travel to remote Nunnery are also just as strange. Although the pair do exchange some information on their backgrounds and what brought them together in another heavy-handed expositional scene, they don't provide much info beyond Burke's statement that the Vatican does things for its own reason. What is clear from the off is that they have been sent to the nunnery to investigate the suicide of a young nun, which they see is indicative of a much larger problem. In what probably turns out to the movie's only big narrative development, the castle is actually humanities last defence against an ancient evil, conjured up by the castle's original owner who had a thing for black magic. The demon has recently woken from its slumber thanks to the attacks from the bombers in WW2.

With the screenplay stuffed full of fumbled comedic moments, the director, Corin Hardy does, to his credit, pump the film full of in-your-face horror imagery which might just make you hide chuckles as it will make you gasp. There's a cross which turns upside-down and bursts into flames within the movie's first five minutes. But this isn't too bad of a thing as Hardy does give us some harsh light where it is difficult to see what is going on, some nice jump scares, loud sound-effects and some strange dolly-zooms, using every tool in the modern-horror toy-box to try and scare us.

The actual direction though does give us some effective scary sequences. I particularly liked the way he filmed his ghosts, preying on the living by circling them and then melting back into the shadows. The violence is perhaps the harshest of the entire franchise and it doesn't help that the Nun herself looks sillier and sillier the more the camera lingers on her, despite some nice looks from her.

Unfortunately though, if you loose your breath for this latest instalment into The Conjuring franchise, it'll probably be from laughter, but if you're happy to adjust your expectations and expect something loud, lurid and sometimes utterly ridiculous, you will probably really enjoy this outing...