Doctor Who: Supremacy of the Cybermen - Review 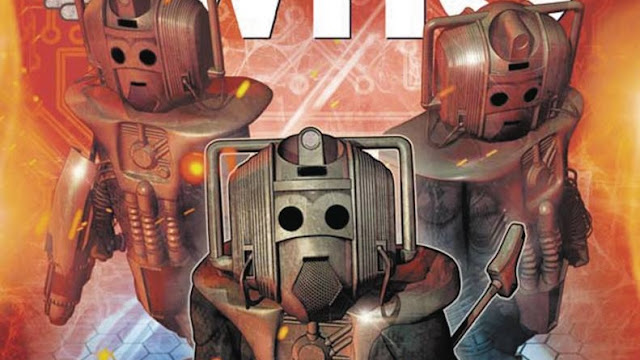 The Cybermen have always been one of my favourite villains, in fact they are one my favourite science fiction villains. But why are they so popular? I think its because, like the Daleks, they play into some base-instinct fear, a fear of technology and a fear of suppression. There is also a fear of being imprisoned and turned into something we don't want to be and can never escape from. The Borg from Star Trek, tap into a similar vein and are equally as effective.

Supremecy of the Cybermen was originally released as a five-part comic book miniseries last year and is now available in a shiny new package. I much prefer to read these finite series' as they read so much better than having to wait thirty days for the next issue. Written by George Mann and Cavin Scott we get a cast of, not exactly hundreds, but lots of characters, including the Ninth, Tenth, Eleventh and Twelfth Doctors and their companions, Rose Tyler, Jackie Tyler, Captain Jack, Gabby Gonzalez, Cindy Wu and Alice Obiefune. Oh and then there is a little bit of fun at the end with the First, Second, Third, Fourth, Fifth, Sixth, Seventh, Eighth and the War Doctor as well as Susan, Polly, The Master, K9, Peri, Mel, The Lady Inquistor, Ace, the Sisterhood of Karn amongst others.

With so many characters involved, there is a lot of introducing to do, so nearly a quarter of the book is taken up with us getting to know the Doctor and his companions and where and when exactly they are. Whilst this is neccessary, the vast majority of the readers will be Doctor Who fans, so this doesn't come across as anything other than a waste of pages. Luckily the central plot hangs on the Twelfth Doctor who realises something is wrong and travels to Gallifrey using a backdoor on Karn. Arriving on Gallifrey, he discovers that Rassilon, the despot he exiled, has come back with an army of Cybermen and it appears that Rassilon has joined the Gallifrey and the Cybermen into a very unholy alliance.

While back in prehistoric times, the Eleventh Doctor and Alice encounter Silurian-Cybermen, the Tenth Doctor finds scared Sontarans fighting a Cyber-army and the Ninth Doctor is in London 2006 with Rose, Jack and Jackie, fighting a full-scale invasion. That sure is a lot of metal! Each Doctor is discovering something is very wrong and the Cybermasses are spreading by the minute and are conquering and converting at a terrifying rate.

The Doctor learns about how Rassilon was converted so he could lead the Cybermen and he learns that all the TARDISes have been disabled and no one can go back in time and stop what has happened. This start to heat up in each timeline and each Doctor and his companions find themselves edging closer to death.

Of course, the Doctor finds a weakness in them when they convert the Tenth Doctor who uses his intellect to corrupt them. The Cybermen finally turn on Rassilon but they don't count on Rassilon teaming up with the Doctor and using the Eye of Harmony, they turn back time and heal it. The Cybermen aren't defeated by fighting but by healing.

There is a lot of action crammed into 120 pages and it is great fun to read. It is a well delivered story and all of the Doctor's involved are given their own time to shine. The art is brilliant, particularly the fun little nods to the previous Doctors at the end, it really helped to break the story up and helped us in understanding the complicated script.

This really is a comic book version of a summertime blockbuster. There isn't much in subtlety to be seen but the widescreen feel, the fun and the action certainly deliver in spades...