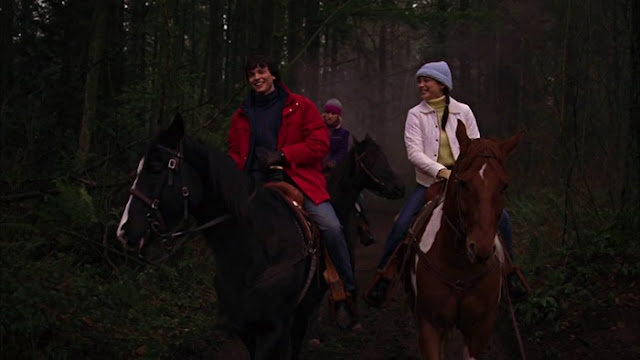 Out of all of Season 1, Hug has to be one of the best episodes of the 21 episode run. The writing really picks up here and the dialogue has begun to feel a lot less clunky and more natural. And we finally get to have a proper glimpse at the evil side of Lex.

Lex always was one of my favourite characters on Smallville and the writers really latched onto the mystery and thoughts that plague him, making him a much more interesting character than some. Lex firing the machine gun at Clark has to be one of the best scenes in Smallville history. One has to wonder whether that was a result of the kryptonite handshake or the result of Lex wanting to know the truth.

One thing I don't think is that Lex is faking his friendship with Clark. Many times he gives him the chance to tell him his secret but Lex is so damaged and broken that he forgives Clark every-time he lies to him. But what I really like is that the two characters that this episode centres on were once best-friends who became enemies. The writers, even this early on, have started to foreshadow the relationship between Clark and Lex.

But Jonathan Kent is still a little annoying., Quick to sell his farm, not his fault thanks to another kryptonite induced handshake, shoots Clark down when he suggests going to Lex for help. As far as I'm concerned when you sell your livelihood away like that, you don't really have much option! Hopefully he becomes less insufferable as the series goes on!