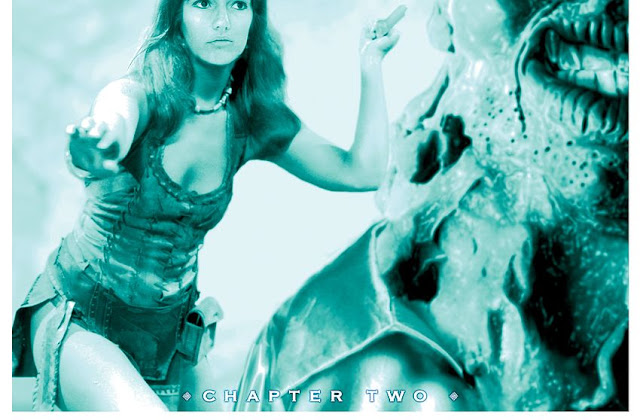 For many fans, Square One was the moment they knew that Gallifrey would be the gift that kept on giving. It is great to hear so many of the Doctor's old companions working together but it is also great to get a series where it has so many great female leads. Romana, Leela, Hoosak, Lexi and Baano all lead this story and it is great to hear. Even today, sci-fi is usually a male lead genre, so Gallifrey still feels quite like a breath of fresh air.

With a great cast, the script is also enjoyable as it ties in and begins to wrap up the storyline that has been ongoing since The Apocalypse Element. We've got a meeting of different alien races all of whom have achieved time-travel and they are laying out the ground-rules for its use. Naturally the other races don't trust the Time Lords as they believe they will deceive them and dictate everyone. And there is plenty of spying going on. Romana sends Leela to spy on the spies as she recognises that 'primitive' doesn't mean 'stupid', a distinction that many people in real life fail to understand.

Square One also sees the Monan Host emerging as a great foil yet again, though it still isn't clear if they are going to be enemies or allies for the Time Lords.

Of course backstabbing is obligatory for a story like this, but there is a clever time-travelling element thrown in to keep the proceedings new and refreshing. The setting of a conference on an asteroid with robotic servitors and exploited showgirl entertainers, is used to keep a real conference secret which sees Leela having to face the real, 'for the dads' reasons she was created for the series back in the 1970s and she doesn't have the patience for it.

Leela really is the breakout character here and possibly throughout the entire range. She really wins us over thanks to her childlike purity, warrior ferocity, her sense of right and wrong and her care for those who are weaker than her. It sets her apart from everyone else in a really nice way. And less pure but still just as noble is Romana who has emerged as a master tactician and a formidable diplomat, swooping in to save the day when the conference begins to break down.

Square One is an enjoyable and formidable story which will keep you interested from its opening moments to its final ones. The only weakness it really has is its villain who falls a little flat. But that is only a minor quibble...