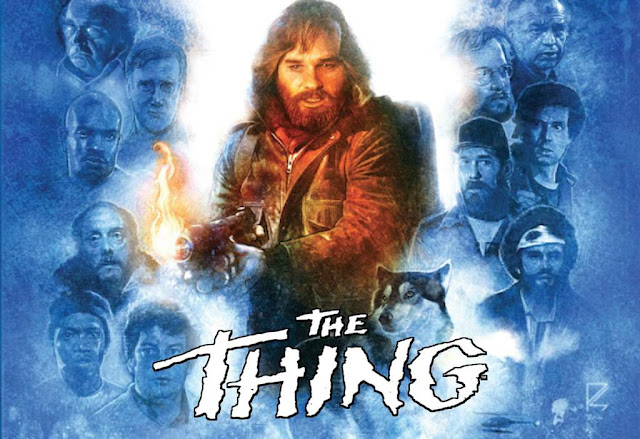 The Thing works as a great barf-bag of a movie but is it really as good as everyone seems to think? Well, while I certainly enjoyed it, it does have a couple of elements which really let it down, the first is the superficial characterisations and the second is the implausible way the crew of the Arctic Base begin to behave. While I love many John Carpenter films, Halloween and The Fog being two strong examples, characters have never been Carpenter's strongest point in any of his films. However, in this film, aside from the usual, drunk, psycho and hero characters, we've got character's whose soul purpose for existence is to be jumped on and murdered. In fact, the few scenes we get where there is some small character development are often overshadowed by the setup for an attack by the thing.

This of course leads us into the second problem the film suffers from, plausibility. We learn that the thing likes to wait till you are alone to pick up off, kill you and then imitate you and so the obvious solution is to create a buddy system but Carpenter still has characters managing to break away and going places on their own. Then they come back with silly grins on their faces, until we loose count of those who have been killed and who hasn't. That rather takes the fun out of the proceedings.

What we are really left with then is one of those gross-out films where friends can dare one another to go away and watch it alone. And there is nothing wrong with that, I watched The Thing alone and found myself surprisingly unnerved by some of the scenes in it. But it will quickly become clear that the crew decided to focus on the special and visual effects rather than the characters who end up feeling secondary to the impressive effects on offer here.

But this is all material that has been done before and handled better, check out the original version of this movie or Alien to see what I mean. There is absolutely no other reason to see this movie unless you want to see some alien growing from gloopy innards, into a dog and then into some gory mess with spider-legs. Bafflingly though however, nowadays that is exactly what moviegoers want to see, a gore-fest and not something that is scary because of the predicament of its strong, main characters...