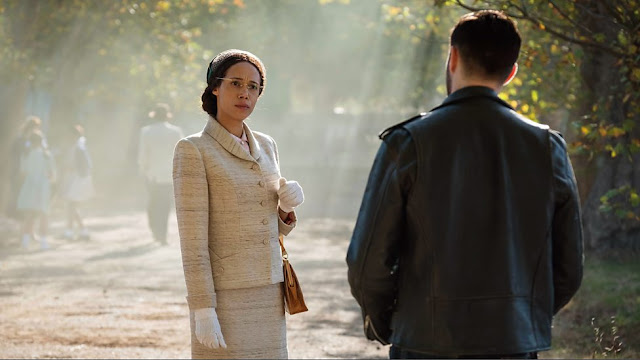 I think it is fair to say that there was a lot of ways that Doctor Who might have failed with an episode that dealt with the themes it did in Rosa. It may have fallen back onto the old tale that Rosa Parks was simply too tired to give up her seat or it could have gone the other way and included far to much alien intervention and stop the episode from becoming about her. Worst of all, it might have gone for the Doctor inspiring Rosa to do what she did. To my surprise then, writers Malorie Blackman and Chris Chibnal were incredibly clever about how they structured this powerful tale. The final product is about the Doctor and her companions making sure that history stays on the right track and Rosa makes her stand so she can change the world.

Doctor Who was first broadcast eight years after Rosa changed the path of the civil rights movement and it was intended to be an educational programme and Rosa is the first historical episode from the modern series to return to those historical roots. As well as delivering some information on Rosa Park's real life, it also informs the audience about the racism in America in the 1950s and onwards. The episode doesn't pull its punches when it comes to people treating Ryan and Yaz as if they are property. Ryan is literally punched in the face for trying to help a woman who is white and when we first meet Rosa, she tells us about the lynching of Emmett Till as an example of how black teenagers are abused simply for talking to white women. In fact, the real life Parks cited the lynching of Emmett Till as one of the reasons she refused to give up her seat on the bus in 1955.

Doctor Who hasn't really shyed away from the idea of companions facing racism, Martha had to endure it in Human Nature/The Family of Blood and so did Bill in Thin Ice, but this is the first episode of the show to actually have racism as its main villian. Rosa offers us an avatar for racism in the form of escaped prisoner from the future, Krasko, played by Josh Bowman, who is trying to stop the civil rights movement from ever happening by changing Rosa's actions. Ultimately though, he ends up just being a plot device, the episode instead focusing on sytematic racism. The episode takes its time to show us segregated buses, from the way that black people had to pay their fare at the front and then get out and enter the bus through the back to the way that non-black people of colour, like Yaz, aren't sure where they fit into the system. Seeing Ryan having to take a seat at the back of the bus, seperated from his friends visually captured the hate people had to endure at the time, without offering a moment of heroism from the Doctor.

What the episode also manages to avoid is giving the modern day a pat on the back because it didn't present racism that has been removed from modern society. Forced to hide behind a bin at the back of a hotel, Yaz and Ryan share stories where they have experienced extreme racism. Yaz talks about being called a terrorist amongst other racial slurs and Ryan calls out the police force because he stopped a lot more that his white mates his age. This scene works because it shows us how far we have come but how far we still have to go. Yaz sums it perfectly when she says, "They don't win, those people. I can be a police officer because people like Rosa Parks fought those battles for me. For us. In 53 years they'll have a black president as a leader. Who knows where they'll be 50 years after that."

It works as the moment when the whole episode manages to snap, completely, into focus, apart from every time Rosa Parks in screen. In an excellent guest star turn, Vinette Robinson projects gravitas, dignity and seemingly the spirit of the real woman, all the time ensuring that Rosa feels like a real person and not just an historical figure for the Doctor to meet. But because the episode wanted to avoid Rosa getting caught up in the time travelling elements of the plot, she isn't in the story as much as one might have liked. But what it does do is give some sweet little scenes between her and Ryan and Yaz, allowing Robinson to inject some warmth and humour into the proceedings alongside the dignity she portrays throughout the whole piece.

Where Rosa does struggle is its scenes where the titular real life figure isn't around. Really it either needed to spend more or less time with Krasko to develop him into a proper character and not just a hollow characature. Rosa also spends too much time focusing on how each character works to undo Krasko's many plans he has put in place. I would have rather spent more time with Ryan and Rosa meeting her husband Raymond Parks, lawyer Fred Gray and Reverend Martin Luthor King, Jr. But overall those are just minor quibbles in what was otherwise a tremendous outing for the Doctor and her companions.

Rosa really hit me emotionally on the first watch but on the second, I found myself getting swept up in the action as well as the emotions. Doctor Who has always been a show that allows us to see the strength in ordinary people but that usually comes from a monologue from the Doctor. Having the Doctor, Ryan, Yaz and Graham having to stay quiet and watch Rosa make her stand and allows it to stand as a moving piece of drama on its own. One of the most complex moments of this episode is when Graham realises that he is the white person Rosa has to stand for and Bradley Walsh sells the moment fantastically. It is powerful moment that even the most hard-hearted of people will struggle not to find moving and empowering.

On the first watch, I originally found Rosa's protest and arrest to Andra Day's song, 'Rise Up', as a moment which may have pushed the lily a little too far. But on a second watch, it was an excellent choice. While the song is certainly empowering, it gains even more complexity when it is paired with the faces of Rosa, the Doctor and her companions all forced to play their part in history. Rosa doesn't argue that standing up to prejudice is easy or that history can just change swiftly. The Doctor explains that Park's life was still hard, and even though she won the highest honors from Bill Clinton in 1999 when she was awarded the Congressional Gold Medal but as Ryan notes, it still took far too long. Doctor Who succeeds in showing Rosa Parks as much of a hero as any fictional character and this episode feels like it telling a really powerful statement and it certainly couldn't be a more timely one...