Doctor Who and the Horror of Fang Rock - Audiobook Review 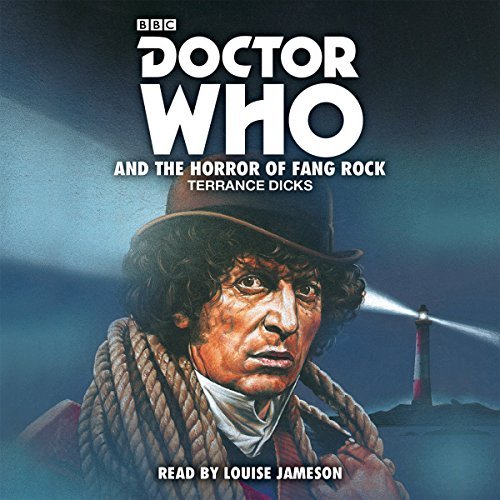 I was born towards the end of the nintees so I missed out on the Target book craze but over the years, I've gradually made myself quite the collection. I think, overall, I've managed to purchase the vast majority. But Horror of Fang Rock is one that I've never managed to get my hands on, whether that is down to the second-hand bookshops or charity shops never having much Who related material in them, or there is other books I'd like to spend my money on, is anyones guess. But when it came to purchasing Horror of Fang Rock, it was a story I came to having only seen the television version and no memories of having read it in printed format.

I've heard mixed things about the BBC audiobooks, with Big Finish being much superior in terms of audio-related quality. But Horror of Fang Rock surprised me, never having really enjoyed someone reading a book to me, I've always got my nose stuck in a book, it took me a while to get around to listening. But I was very impressed by what I heard.

Adapting his own script, Terrance Dicks takes control of the new format and gives us some interesting backstories for all of our guest cast and writes new passages and things that never happened in the television version.

His new take on his original story doesn't have the same creative scope as audios like Day of the Daleks or The Auton Invasion, Horror of Fang Rock as always worked for me because it is a solid Doctor Who adventure. And Horror has the delight of being one of those novels he actually put some effort into, rather than just writing the script out in a different way.

We also get a new layer of tension, thanks largely to the fantastic narration from Louise Jameson, who played Leela in the original version. While she has brought Leela to life once again for Big Finish, this is, surprisingly, her first BBC Audiobook. And based on her work here, it is hard to understand why she was never approached to narrate an earlier one. I hope this isn't the last we hear from her here.

Jameson approaches this book as if she is sat around a campfire, telling a spooky story. Wisely, she doesn't do a pitch perfect interpretation of each character and gives us her own version of each character. And it goes without saying that Leela is a particular highlight of this novel.

Overall Doctor Who and the Horror of Fang Rock is a successful entry into the BBC Audio world. It managed to convert me and as I enjoyed this one so much, I've taken the plunge and purchased the latest audiobook, The Dominators. While I'm yet to listen to it, this one has given some high hopes...