Doctor Who: The Sun Makers - Review 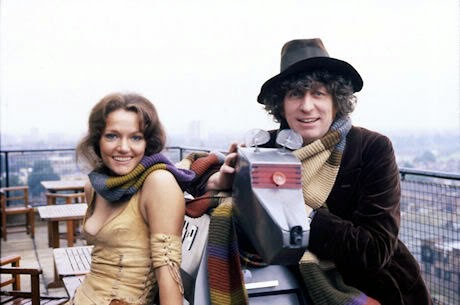 In 1966, George Harrison was annoyed by a tax report he received from the Tax-Man. This frustration lead him to write Taxman, a record which many critics have claimed is one of the greatest pieces of music. And in 1978, Robert Holmes wrote, The Sun Makers for much the same reason!

Looking at The Sun Makers from a production point, it looks pretty cheap. The costumes are incredibly drab, the sets bland and boring, the props are cheap and the direction from Pennant Roberts is so lifeless it would find work on The Walking Dead. Take for example the shootout in the corridor between Leela and the guards. It is so poorly shot that it is almost embarrassing.

Luckily the script from Holmes more than makes up for the production misgivings. Looking at this story plot-wise, it is your fairly standard Doctor Who adventure. The Doctor rescues the oppressed masses. But what sets it apart from those others is its variation on that theme and that the cast is all but playing this for laughs. While much of the political message was toned down by the producer, Graham Williams, it is still a very funny satirical look on the British tax-system. The corridors have funny names like P45 and the guards are called the Inner Retinue, which sounds strangely like the Inland Revenue.

Actors, Henry Woolf and Richard Leech, as the Collector and Gatherer Hade, seem to know what type of story this is and deliberately play things OTT. Leech makes the most of the ridiculous costume he has been given and devours the humorous dialogue.

But Holmes doesn't just reserve his criticisms for the then government. The oppressive taxes aren't being carried out by Socialists but a worse foe than the Daleks, the Capitalists. The entire human race has been privatized by a greedy outer-space conglomerate. And as always, the rich live comfortably and without a worry while the poor toil and work till their backs break, giving their money to ridiculously wealthy.

In 1977 this story seemed like a future vision of Margaret Thatcher's government and the future that was just around the corner...