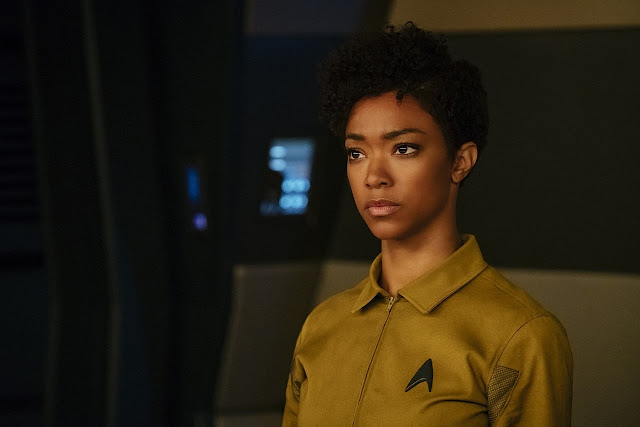 Following on from the two part epic which saw the war between the Human race and the Klingon Empire erupt, Context is for Kings is the first episode where we actually get to see what Discovery is going to be like.

The USS.Discovery is a mysterious ship full of mysterious crew members all of whom are doing mysterious things, mysteriously. Thrown into the mix is Michael Burnham, mysteriously as she has no idea why she is there. She is six-months into her life long prison sentence, sporting a new prison hairdo and is now a Ro Laren/Tom Paris-ish like character. Burnham isn't interested in getting involved in whatever is going on in the Discovery, all she wants to do is keep her head down, go back to prison and serve her time. Of course, this is what she say, not really what she does. She isn't even on the ship a day, when she decides to break into the secret labs and poke about. Something that the strange captain had already expected her to do... 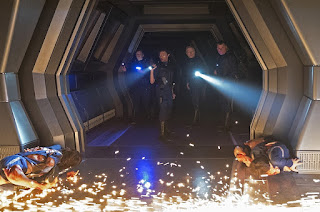 What has been perfectly clear from the first three episodes of Discovery is that it isn't going to be the Utopian paradise that the show was in during the time of Gene Roddenberry. Nothing encapulates this point better than Captain Gabriel Lorca, played with menace by Jason Issacs. In the previous series's of Star Trek, the captain has always been a reassuring figure, the emotional and moral compass for the show and the person we viewers could always rely on to do the right thing. But in the form of Lorca, we have a captain who is evidently untrustworthy, manipulative, militaristic and who probably practices dark magic! Nothing would surprise me if he ends up being the real villain of this series. So, in short, he is everything that Roddenberry would not want a Starfleet captain to be. And from this episode alone, that isn't a bad thing.

One of the biggest reasons that the original series' of Star Trek had shrivelled and died painfully was because the creators weren't willing to push the boundries of what had been laid out for them. They were unwilling to embrace the notion of change or innovation and this lead to the show slipping into stagnation. What also didn't help was that the idiot producers decided to make their female characters nothing more than eye-candy for horny teenagers in their tight, (and I mean tight), catsuits. Star Trek quickly went from being fresh and innovative to dull and embarrassing. While us Trekkies will still love them, the general public has all-but forgotten about them. 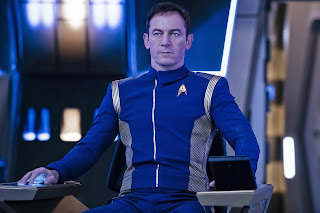 This brings us to Discovery, our latest hope for a brand new Star Trek franchise. Following the slight flop that was Star Trek Beyond, I don't think we'll be seeing a new Star Trek movie anytime soon, which would be a shame as I feel it would be a great way of re-introducing the Borg. But for the most part, this is fine for me as I've always felt Star Trek worked best on the television. The format of television naturally allows for more scope, variety and a chance for secondary characters to really shine.

When Discovery was first announced, I had hoped it had the combined strength of character and storytelling that Deep Space Nine had and the innovation and clever sci-fi ideas of the Original Series and The Next Generation. I wanted it to have the spirit of Roddenberry's original outlines but for it not to be afraid to challenge them or question them. More importantly though, I wanted a show that understood that Star Trek needed to survive on television. And luckily, Context is for Kings is an episode that does just that. I'm not saying it is on the same level as some of the episodes from the original series', but it is exactly what I'm looking for from a modern series of Trek.

One thing this episode did really well was exploring the contradition that is in Starfleet itself. This is a military organisation with something of a military hierarchy whose mission is that of peace and exploration. Starfleet officers are supposed to explorers first and soldiers second but it is interesting to see how quickly the roles are switched when they are in danger. At this been a time of peace, the Discovery would have been a science and exploration ship. But in war, it has become a little 'Manhattan Project' in it pushing of scienctific experiements in the war with the Klingons.

Perhaps the weakest thing with this episode was the rushed mission on the Glen. A whole episode could have been made of Burnham, Staments, Tilly, Commander Cylon and the red-shirted Mulder, scurrying about the blood-spattered wreck of the ship. Instead, the whole sequence of events was over and done with in a matter of minutes and as a result, the mission feels shoehorned in as a way of getting Burnham a selfless hero moment. However, I did find the shushing Klingon a hell-of-a-lot funnier than I should have done!

And who could forget Tilly asking, "Is that a book?" Somewhere Buffy's Rupert Giles is weeping...