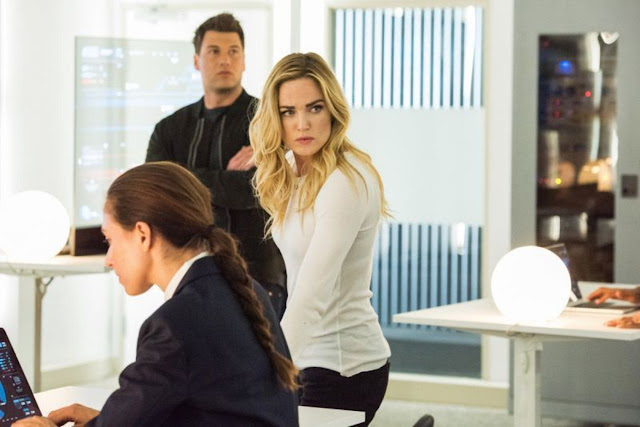 From the word go, Legends of Tomorrow was easily one of the best superhero shows on the CW, part of this was because the writers and producers knew the identity of the show from the very beginning. I did feel a twinge of panic half-way through this opening episode for the third season when it seemed that the creators had decided to play the thing as a straight comedy.

But I needn't have worried, the show has always been more of an action-comedy, owning its craziness and geeky side to the more niche parts of the DC Comics universe. This episode still had the strong sense of character and relationships and some solid acting to pull off all the jokes and comedy aspects. But for me, they pushed too hard on them making all these mistakes they have to clean up, they pushed almost a little too much, which kept the episode from being almost perfect.

The action picks up where the previous season left off, with LA overrun by anacronisms and the Legends have no idea how to fix it. Almost immediately though, time-windows open up and all the dinosaurs and other anacronisms get sent back where they came from. We find out that Rip Hunter had created the Time Bureau, an organisation to montier what the Time Masters had done, but with less evil intent and more paperwork. Rip unfairly calls the Legends screw ups, going on to say the Time Bureau can handle everything from now on. For me, this statement didn't really work, they acknowledge that Rip formed the Legends in the first place but he has seen all the good they can do first hand, so him saying something like this really didn't sit right with me.

Going their seperate ways isn't good for nearly everyone. Sara is stuck in a dead-end retail job, throwing kitchen knifes into cooking boards and fantasising about killing her boss. Ray works in a Silicone Valley-style buisness, a good job but not good enough for his intellect. Nate is being Citizen Steel with Kid Flash in Central City but not dating Amaya who has left for her time in the 1940s. Jax dropped out of grad-school and is now drifting. Even the Waverider's sentient computer, Gideon has been shut down and is now used for practice missions. The only people in good places are Professor Stein, who is about to become a grandfather and Mick, who is relaxing, finally in Aruba. All until Julius Ceaser turns up to ruin his day.

The last point sets up the story and Sara, Nate and Ray quickly get the band back together, they steal the Waverider and try to return Ceaser to his own time to prove their worth to the Time Bureau. As usual, there is a slight hiccup, but eventually, they are successful and get integrated with the Bureau with a few words about how they will never be ready to defeat the mysterious big bad of the season. Everything in this episode is damn adequate and is sprinkled with brilliant moments from its powerful cast. Jax, Stein, Sara and Mick have some touching moments while Ray and Nate are happy enough broing it up!

Aruba-Con is a satisfactory way of resetting the board for the new season. True, it won't light the world on fire but it is bright and fun and sets up the introduction for the larger arc. But more than that, it reminded us why Legends of Tomrrow is one of strongest shows the CW has to offer...