Doctor Who: Sword of Orion - Review 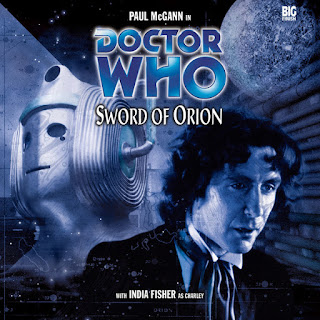 Sword of Orion sees the Eighth Doctor and Charley face the Cybermen in a grimy old spaceport and an even grimier old spaceship. And with this being only her second adventure, Charley excepts all this without even batting an eyelid.

This audio is a good old fashioned story with that old trope of the Doctor landing in the wrong place at the wrong time, gets accused of a crime he didn't commit and then helps to find the real culprit. Of course, it is has the Big Finish spin on it where the secondary characters get a bit more development and there is an unfortunately high body count.

Apart from the body count, I could easily imagine this being a late eighties or nineties story. Those eighties stories usually fell back to rely on action driven storylines with the Doctor and his companions trying to stay one step ahead of an unseen enemy which is trying to kill them horribly.

What is really striking about this audio adventure is just how well Paul McGann and India Fisher play off each other. So good is their interaction that you would never guess this is only their second story. Two and-a-half of the secondary characters are simply excellent. We've got the hard-as-nails captain, whose real mission is one of the reasons many people love this story.

The rest of the crew are fairly dull and uninteresting but what doesn't help is that some of them aren't around for long enough to receive any form of development. Some of the characters you can't help feel sympathetic for in the end, but the majority of them will grate on you're nerves to much for it to really matter.

Nicholas Briggs really hits it recreating the voices for the 1980s Cybermen, He is really successful at his imitations!

And also as a little trivia note: I think this is the first appearance of the sonic screwdriver in the audiobooks...