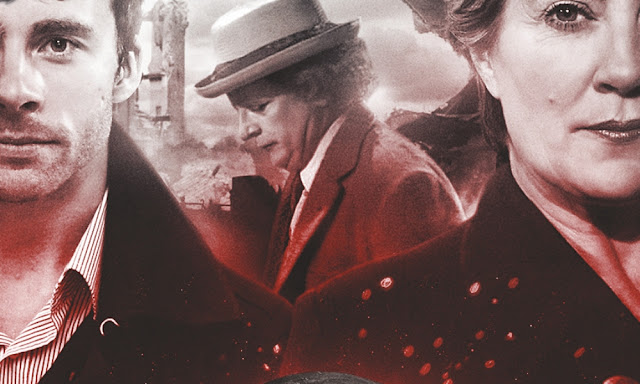 Persuasion brings Elizabeth Klein back! Everyone's favourite not-a-Nazi is still puttering along with UNIT following the events of UNIT: Dominion, with her new assistant, Will Arrowsmith. Suddenly, the Doctor pops back up in her life, the Seventh Doctor is now nearing the end of his regeneration and is tiring of death and war. Persuasion began the beginning of a 2013 trilogy of audio adventures featuring the Seventh Doctor, Klein and Will on the hunt across time for a mysterious piece of Nazi technology.

This is a deceiving story, the cover promises a dramatic, gripping and gritty tale but unfortunately we don't get this and what we get instead feels unfocused. When I was listening to this tale I really wanted to enjoy it but in the end, it just feels a bit of a mess.

Each episode of Persuasion is a lot shorter than normal, barely coming up to twenty-five minutes each. But within each episode it felt like very little actually happened. It takes the entirety of the first episode for the story to actually get to where it should be going, all of the second to allow us to understand what is really going on. Everyone talks about what is happening when we get to hear very little of it! Things are dragged out of characters who don't want to help who then decide to help a little later on.

There are some interesting ideas in this story, but very little comes off. The villains are from another universe, but this is related to us by having them talk in an iambic pentameter with some voice modulation thrown in for good measure. It isn't bad but it isn't enough to make them aliens so impressive that they burn into our memories. It also doesn't help that these aliens need humans from the 1940s to make them really effective. The plot as a whole just isn't interesting. The very idea of setting a story in Dusseldorf after the Allied Invasion and then moving the action to Minos where a Nazi is hiding is an interesting one, but neither idea is capitalised on, with little atmosphere communicated to us listeners.

Klein herself, someone I really loved through Colditz, her later trilogy and UNIT: Dominion, doesn't seem to doing lots here, despite her supposed importance to the overall story. Also, what is the point of her character if she isn't a Nazi anymore? Sure, she is still willing to be harsh to get the job done but here she is constantly questioning the Doctor's harsh methods. Just where does new attitude come from? It does seem to be born from her dislike of 'The Umbrella Man', but Klein is too good of a character to be wandering around asking the Doctor what is going on. Surely we could have just got Raine back if that was all we were going to get! But actress Tracey Childs can never be faulted!

New companion Will Arrowsmith is a whole different kettle of fish, I can see where Big Finish are going with this awkward, nerdy character, I'm just not sure why we need him. Part of the problem comes from the actor, Christian Edwards who pitches his performance just a little off. Had Will's lines been delivered in Edward's normal voice, then he would have been more bearable but this over-the-top caricature with a high-pitched voice is a little too on-the-nose for me. There were bits of this story with him that I liked, but on the whole, he left me disinterested in the proceedings. I don't hate him but I'm not interested in him. Persuasion gave me no reason to be.

But the guest cast feature highlights from David Sibley and Jonathan Forbes as two Nazi scientists, both with doubts over what has happened and what they have done. They are interesting, complex, with excellent performances to match. Why-oh-why, couldn't one of these have been the new companion?!

One thing I did really like was Jonathan Barnes' take on the tired Seventh Doctor. The Doctor has become even more distant and mission-orientated since UNIT: Dominion, even more so than in his God-defeating days. But he is also quieter and more at peace now and the fact that he is coming to the end of his life is used really well.

It is a shame that overall this was such a disappointing start to what promised to be a brilliant trilogy of adventures, made all the more disappointing by the story's non-ending - ending. Stretch a good story out but when it is isn't all that good to begin with, then leave it alone. Another cliff-hanger is the worst thing you can possibly give it...