Doctor Who: The Ghost Trap - Review 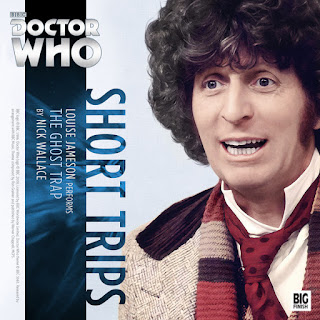 Released in 2015, The Ghost Trap was the fourth release in Big Finish's new range of Short Trips, audio adventures. And written by Nick Wallace, this adventure saw the Fourth Doctor and Leela arriving on a living spaceship only to find that something isn't right.

Louise Jameson is on narration duty while also playing Leela as wonderfully as always. Jameson is a great performer and narrator and the story oozes mysterious sounds, shadows and mysteries. The story sees the TARDIS landing in a derelict spaceship after answering a distress call sent out by a salvage crew. On their exploration of the ship, they find the salvage crew dead and on viewing the footage they filmed, they see how they were stalked by a strange spectre. Leela finds herself separated from the Doctor forcing her to rely on instinct alone to survive.

The story is a really solid one and the audio is enhanced by the various voice effects and Louise Jameson effortlessly breezes through being the Fourth Doctor, Leela, Voice Recordings and a voice which speaks over the ship intercom.

And although the story is on audio alone, it really feels dark and dank, filled with moments which will make your heart beat that little bit faster and full marks must be given to Louise Jameson for her narration and the marvellous script from Nick Wallace.

The story is kept interesting by a few little twists and turns which make the setting get darker and darker. Before the tale can wrap up, the Doctor is faced with a couple of nasty decisions that the Fourth Doctor never had to face on television.

And with Nick Wallace having penned a few more tales for this range, I can't wait to hear them while exploring the new Short Trips...