Doctor Who: Council of War - Review 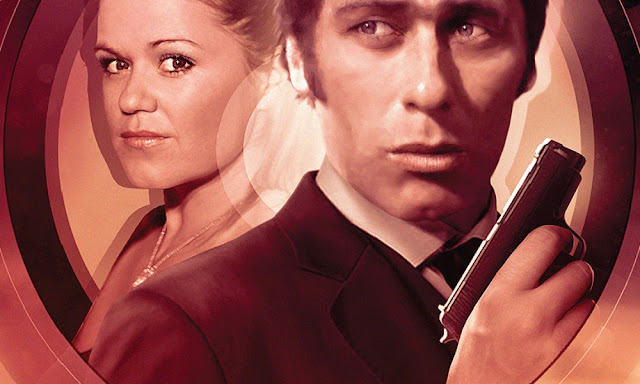 This tale starts out with Benton undercover, James Bond style. Only, in true Doctor Who style, he is actually infiltrating Kettering Town Council's, Christmas party to investigate a series of hauntings. It is all very glamorous. It doesn't take him long to encounter Margery Phillips, the vegetarian crusader on the council, she takes a liking to him but is also suspicious. But then things go really nuts and Benton and Margery find themselves miles away from Earth.

The whole story is a complete blast. Barnard and Morris have a huge amount of fun poking fun at the spy/thriller genres and the tropes that they entail, while managing to make things goofy in a way that only they could do. The secret behind the hauntings, Margery's reactions to it and what the aliens want with Kettering all play themselves out in a great set of twists and turns, while the script is both fun and funny, though one can't help but think that the cliff-hanger is slightly misjudged.

John Levene hadn't been in a Big Finish story before this one and it would prove to be his one and only until he agreed to return for the recent UNIT: Extinction box set alongside old UNIT members, Jo Grant (Jones) and Mike Yates and new members, Kate Stewart and Osgood. Levene delivers the story with gusto and infectious energy and keeps Benton as the same dependable fellow he was on the television series in the 70s. Sinead Keenan is also a complete delight as Margery Phillips and sparks brilliantly with Levene.

You won't be given any deep insights into the life of Benton here though. But we do get to see him at his best and that is good enough. Council of War a slice of delight and another reminder that the regular run of Companion Chronicles came to an end...