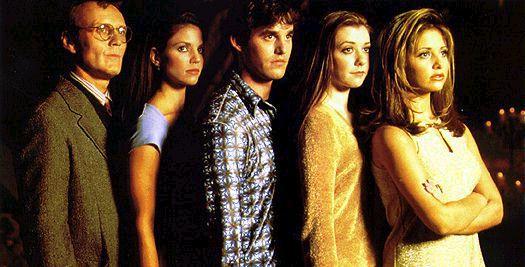 What is really great about this episode is that you really do feel like the end of the world is nigh, thank god that Buffy and her friends are on the case!

It is a shame then that this isn't the best Buffy episode in the grand scheme of things. Sure, it does give us our first times with Buffy averting her first apocalypse and our main characters start to bond over the first of the exposition heavy library scenes. We even get Giles researching the end of the world, Willow hacking into the city plans and Xander follows Buffy as her boy wonder.

Out of all the Buffy villains, it is the Master that I have never been too fond of and despite the occasional bon mot, he was too much of an unambiguous, moustache twirling villain. His scenes with Luke are definitely almost over the top. And while it was great to see Buffy outwit Luke in the end, it is almost too much to believe that someone as stupid as Luke would have lived this long!

And then there is the character treatment of Cordelia as she rags on about Buffy while working on a project in the computer lab. But Willow is showing more gumption than she did in the opening episode, Willow takes her revenge on Cordelia by telling her to hit the enter key.

The other thing I want to point out is how people in Sunnydale seem happy enough to ignore everything that is going on. Or as Cordelia puts it, it is rival gangs behind everything. But Willow and Xander retain their knowledge from the very beginning, it is like they were almost fated to help the Slayer?!

The episode ends, once again in the mausoleum with Buffy meeting her strange and mysterious stranger. She learns his name is Angel and that other vampires don't like him..