Class: What She Does Next Will Astound You - Review 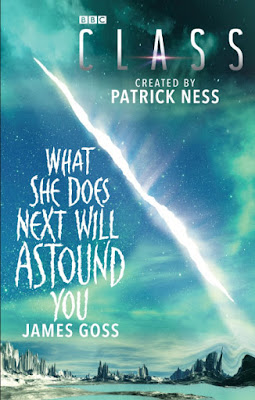 There is a part of me which appreciates websites like Buzzfeed. Their clickbait titles have been perfected, working for the internet in much the same way eye catching headlines have to on newspapers. But sites like Buzzfeed are made for younger generations who gobble up anything that is put on the internet. I will admit that it is quite admirable how their enticing style has taken over the internet and their ability to turn things people don't usually care about into news stories.

I still however, hate it.

But the reason why I was so eager to begin reading What She Does Next Will Astound You, is that it takes these silly Buzzfeed titles as it seems to play into everything I don't like with that website and others of its ilk. And the other reason I wanted to read this book was because it was written by James Goss who really impressed me with his novelisation of City of Death.

Doctor Who has always been one of those shows which is malleable in its storytelling. One episode could be set in a dark Victorian London setting while another in the Far Future. Doctor Who had done one story which focused on the need for Wi-Fi with The Bells of St. John and this something that, What She Does Next, takes to the next level, looking at viral videos, people copying everything on the internet and the loss of innocence that the internet could lead too. But what this book really does is show how malleable the world of Class can be when it is handled right.

Goss was obviously inspired by internet sensation challenges like the Ice Bucket Challenge, but has taken the online fads to a whole new level, while making it still feel absolutely real. Students in and around Coal Hill School have become obsessed with a website which urges you to do things which test your bravery and stupidity. You can either do a very insane stunt or tell something shocking about either yourself or someone else. And no matter what you do, your videos go viral and then you disappear.

Now I really do understand the internet challenges. The Ice Bucket Challenge raised some serious cash for the ALS charity, fighting motor neurone disease. It really was a fantastic cause. But, even when someone dared me to do it, I didn't. There was just something creepy about it. But worse than that, it was almost like the latest version of bullying, raising money through the use of peer pressure. And that notion is what is used in this novel, with Truth or Dare.com raising money to fight Skadis, something which is terrible that no one knows anything about.

Goss wastes no time in waiting for the terrible consequences to make themselves known as people injure themselves and then vanish. But they are their most effective when Ram's phone is stolen and his text messages to his dead girlfriend are revealed to the world. And instead of sympathy, Ram is caught up in a whirlwind of victimisation as if he has no feelings to hurt. And that is the true power behind the internet, especially these days. It is also what the newspapers and celebrity lifestyle can do, we forget that people can be hurt. One day you will the brunt of many jokes, the next day, if your lucky, your nothing more than a footnote.

The books spends of its time focusing on two of the more interesting characters in Class, Ram who is still getting used to his prosthetic leg, the Doctor gave him and April, who the novel predominately focuses on.

April is a great character, during the early episodes she was underused but she is complex and very compassionate and she remains the focal point in the novel. She is the only one to really notice that something is wrong with Truth or Dare.com and she dares to find out what it is. But then she is confronted with the knowledge that she might not actually be able to do anything about it. She quickly becomes a victim, as her peers turn their backs on her because she refuses to do something that she knows is wrong. I'm glad to not that she sticks to her principles, she sees the atrocities going on around her and still holds firm in her belief that what the kids are being made to do is wrong.

And she is the only kid who does this. Mrs. Quill does have a moral centre though it is slightly more off than April's. She is someone who can kill without regret and does so. And this book sees her use a gun. That's right, somehow she manages it, I won't reveal how but it does lead to a really tense scene later in the novel where she decides to confront Charlie, really ready to pull the trigger.

Though the book has lashings of The Bells of St. John, it reminded me more off The Warriors of Kudlak, a story from The Sarah Jane Adventures. And it is even more reminiscent of the Jaqueline Raynor Ninth Doctor novel, Winner Takes All. Things certainly change for the students as the funny-ish story quickly turns into quite a dark war story.

But Goss manages to retain his witty style of writing, making this adventure a pleasure to read. Even though it can be pretty uncomfortable. There is a good description of the type of internet content we are going to get too. And an added incentive to all the Class novels is each chapter has its own name, the ones in this book, poking fun at the type of clickbait titles on Buzzfeed.

What She Does Next is a really unsettling read, especially at its conclusion. We are fed the line that no one at Coal Hill School remembers what has gone on. But I find it unsettling that the kids could forget what they did. They even see what they have done so they shouldn't, realistically be about to move on from it. Surely they would all have had some sort of nervous breakdown. Now, as a standalone story, this works fine, but when it connects into the wider universe of Class and Doctor Who, it is quite a niggling problem. But that is the only complaint I have about this story.

It is important for us to remember that some stories aren't easy. They don't all escape to some friendly alien world where you can instantly tell who the goodies and baddies are. But it is important to read this sort of thing once or twice, it does allow to confront a little thing called human nature. In a grim way, What She Does Next does astound you. But it serves mostly to prove that there are still plenty of stories to tell in Doctor Who and in case, Class...