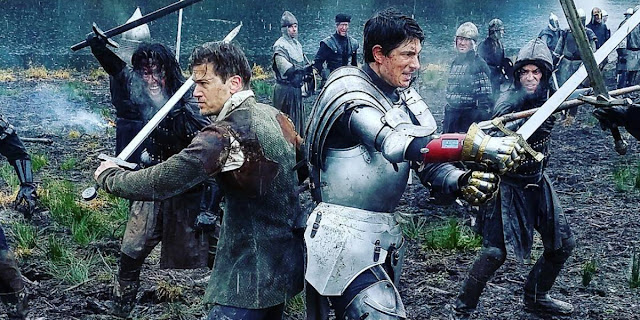 Camelot/3000 sees the Legends continuing their mission to gain all the parts of the Spear of Destiny. Their first stop being to the year 3000, (I'm surprised they didn't reference the Busted song!), then they head back to visit Camelot and King Arthur's court.

This episode sees the fun continue as the Legends try to beat the Legion of Doom to another piece of the Spear. In their first stop to the year 3000, they see the dead body of one of Vixen's JSA friends. This then leads our heroes to go back to Camelot, where they meet Star Girl, but they soon discover that Rip Hunter and Damien Darhk are there too.

It was nice to see that the Camelot they find was very different to the one that they were expecting. For example, Merlin was none other than Star Girl and that she was the protector of a piece of the spear. Of course, things aren't simple, Darhk and Rip have a plan, which involves the use of a device which can control Arthur and his army so that they can take the piece by force.

This episode gave us a lot of fun moments, I particularly liked the fun little reference to Sara Lance - AKA Sara Lancelot when she stole a little kiss from the good knight Guinevere. Ray becoming a member of the round table was a nice touch, though he did take his role a little too seriously when he tried to stop Darhk, something which nearly got him killed.

The end of the episode sees things beginning to return to some sense of normality with the team all together and friends again and Rip in their custody. But, unbeknown to them, he has control over the Waveriders' computer, Gideon. This gives us a nice little hook into the final part of the second season as he is still evil, something which I don't expect will last, no matter how good Arthur Darvill's performance is.

If there was something which I didn't like about this story it was how little time was spent in the year 3000, especially given how the year 3000 was prominent in the title.

At this point, Legends of Tomorrow will continue to be my favourite part of the CW's superhero output because of its willingness to embrace the absurdity of the comic books, something which Arrow needs to learn to do...