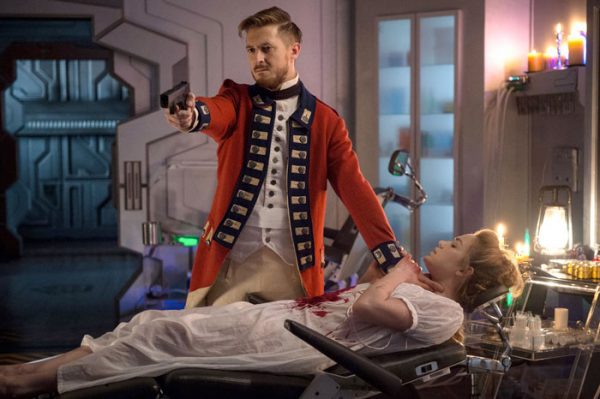 Turncoat sees Legends of Tomorrow deliver a Christmas themed episode making it nearly three months late - but this is a time travel show - what are you going to do?! When time travel is involved, I guess you could always argue that it is Christmas somewhere. This episode allowed the series to continue delivering the same fun, frantic action which it has done so very well this season, while it also takes the time to go to some pretty dark and dramatic places along the way.

I will admit, I did have my reservations about this episode, after the show came back so strongly, I was worried it would slip back into the type of storytelling which would see the Legends protecting some historic, dead person from evil. Indeed, if this episode had just focused on the Legends trying to protect George Washington then it would have probably failed miserably, as the portrayal of Washington was quite bland and boring. With his speeches and his obsession with military etiquette, it did seem like he had just stepped out of a history book.

Luckily, Washington was more of an afterthought in the grand scheme of things for this episode, the real focus of this episode was the reunion between the Legends and their former leader, Rip Hunter. Rip, for now at least, looks to be a villain who is more inclined to trample all over history than safeguard it. As fun as it was the watch Arthur Darvill playing Rip as a cowardly film student from the 1960s, it was even more entertaining to see him playing this new bad version of the character. Perhaps the biggest success of this kind of the character is that he doesn't just appear to be some brainwashed fool. There was some real weight to what Rip was saying as he reflected on his past willingness to put himself before others and his failure to save his family. While the new Rip might be the product of brainwashing, there is little denying that this version of Rip was always somewhere in his head. It was great to see the producers pushing the character in such a different direction.

Evil Rip really managed to keep the action grounded in this episode. There was still plenty of the Legend's charm to go around. Mick's narration at the beginning of the episode took care of that as did Ray's chase through the Waverider's ventilation ducts. I also liked Stein's nice little nod to Doctor McCoy from the Original Series of Star Trek. But despite the humour, this was one of the series' darkest episodes. Sara nearly dies at Rip's hand, Jax finds himself forced to become the acting captain and finds himself on the brink of killing Rip and Stein has a near panic attack when trying to save Sara. While everything works itself out in the end, the Legends find themselves letting another artefact fall into the clutches of the Legion. We need to remember that this is a team who loses even when they win, that is a big part of their appeal.

This episode's darker tone works brilliantly for Jax. Normally, he is a character who is used for comic relief or as a foil to Stein. It was really nice to see Jax being so front and centre and dealing with some really emotional baggage when handling Rip. His hide and seek game with Rip was nothing short of suspenseful and his struggle to stop himself killing Rip was handled very well. By the end of the episode it was hard not to root for Jax, gunning down his former captain, given the emotional gauntlet that Rip had thrown down.

It was also pleasing to see that the writers knew when to get their foot off the accelerator and allow the episode to churn out some good natured Christmas fluff. The impromptu celebration at the end helped to balance out the otherwise glum ending, while reminding us how close this gang have gotten since they were first recruited to stop Vandal Savage.

And this episode is also notable for seeing Nate and Amaya's relationship going to the next level. The pair of them virtually sit out the attack on the ship for some sexy time in a tent. During the first season, romance wasn't Legend's strongest suit but this relationship has shaped up quite nicely. This is of course thanks to the nice chemistry between actors, Nick Zano and Masie Richardson-Sellers. One thing to really enjoy about their relationship is how the writers are tackling how they are both from different eras. Nate tries to explain the complexities of Tinder and the Sexual Revolution while Amaya really does feel like a relic from the 1940s, where she hails from. (That is a side of her character that the writers could do with remembering sometimes!)

Lately, it really looks like Legends can do no wrong. Even this episode, which really did run the risk of being a simpler, more formulaic time-travel fare, manages to give us some dark moments, some exciting moments, some sexual tension and some really wacky heroics. And the debut of Dark Rip Hunter is a really inspired move which looks like it could really work in the show's favour...