Doctor Who: The Androids of Tara - Review 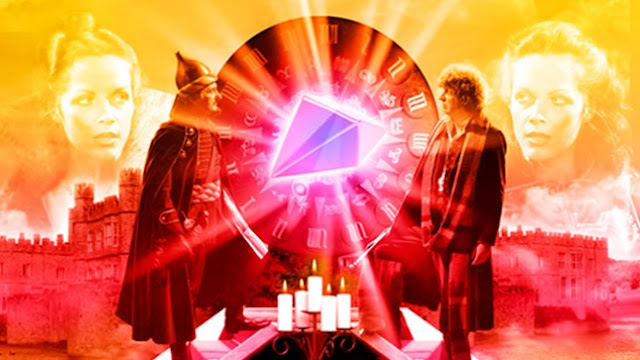 The middle part of any long term storyline is where it can start to drag. The most important part of a storyline like that come at the beginning and the end. The middle part is allowed to coast, it is confident enough that, barring any major mishap, the audience will stick around to see its conclusion. And The Androids of Tara is a textbook example of a middle story, it isn't bad by any means but it just isn't trying. It is oddly fitting how the story begins with the Doctor trying to skive off his mission for the day and gets Romana to go off and look for the Key to Time segment on her own. He just wants to go fishing and isn't drawn into the story until he is forced to do so at sword-point.

In all fairness, Doctor Who in 1978 was doing anything it could to embrace its escapist side and not take itself seriously. The premise for this story is a tongue-in-cheek homage to the classic novel, The Prisoner of Zenda, which it does perfectly. The Doctor and Romana become embroiled in the palace intrigue over the royal succession of a feudal kingdom. Problems are often solved by sword-fighting rather than talking. The original novel's premise revolved around doubles between a prince and a lookalike commoner. It is the androids in the title who do the lookalike-ing, impersonating Tara's Prince, Reynart and the Princess Strella, who looks oddly like Romana. 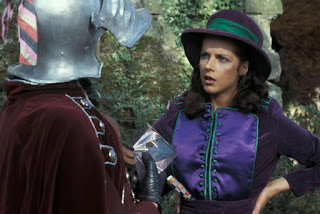 Many of the weaker stories in the Tom Baker era relied on the acting from the cast and this story is no different. The sheer force of Tom Baker's personality and the wonderful performance from Peter Jeffery as Count Grendel. And this story also makes good use of John Leeson, the voice of K-9 who succeeds in making K-9 both a hero and a sardonic counterpoint to the personality of the Fourth Doctor.

It is a pity that this story hadn't been made earlier, during Jon Pertwee's time in the title role. His elegant Third Doctor would have been right in his element here. But it might have been more of a straightforward version of Zenda. Since Baker's Doctor is so anarchic, the Doctor can't help himself but treat the Taran pretentiousness with mockery. This isn't a bad thing though, as Baker is rarely as fun as he is here, swinging swords and running circles around the figures of authority on the formal and stuffy planet of Tara.

This story is light hearted and plays for smaller stakes than many other Baker adventures. And it seemingly ignores the overall plot it plays a part in. It decides to focus its attention on the problems surrounding Taran society, and their little squabbles. In fact, the Key becomes almost irrelevant with Romana finding the segment within the first few minutes, after which, it doesn't have much to do with the rest of the plot. Instead, she and the Doctor are caught up in the middle of the fight for the Taran throne, where the honourable Prince Reynart seems outmatched by the devious Grendel. 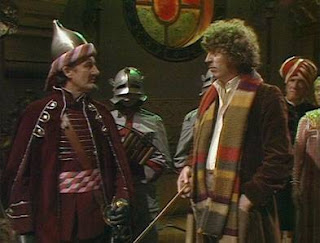 Reynart's motivation throughout the story is simple enough. Get past Grendel's men and into the throne room where he can be crowned king. If he is late to the coronation, the right of king passes to someone else. His plan is to use an android copy of himself to act as a decoy, distracting Grendel's guards and if necessary, taking the throne for a while until it is safe for the real King to take his place. Grendel is fully aware that the fake king is an android, but he can't speak out as it would reveal what he has done with the real king. But the android king, named George by the Doctor, needs constant repairs, so he is only useful to buy time until Reynart can be rescued.

The back and fourth between the two sides, is at least superficially, a classic adventure with plenty of swashbuckling intrigue and action. We've got dastardly kidnappings, daring escapes and even more daring recaptures, crosses and double crosses. It is exciting stuff.

However, the main problem is that the story is full of so many plot-holes and dropped subplots, that the potential for any interesting material, goes either, out of the window, or left to die, gasping for air on the floor. 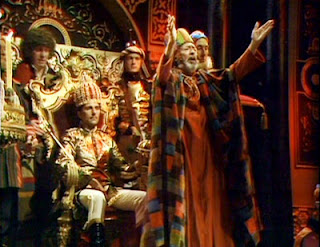 Lets look at Grendel, by far he is most richly developed character and is the sort of villain that you can't help but love. Even though he is a murderous tyrant. He possess a genuinely twisted sense of honour, and is far more clever than any of the other characters on screen, the Doctor and Romana included. He's charming, even if he is going to kill you. He is too evil to be an antihero but you may find it possible to describe him as a anti-villain. Like The Master, when he was portrayed by Roger Delgado, you don't want him to win. But he goes about his plans with such charm and gusto that you don't really want him to loose either. It is really compelling to watch him weaving his plots, he has several schemes running at cross purposes with each other. Why would he keep Reynart alive when Grendel plans on marrying Strella to get himself closer to the throne? And Grendel very nearly does get himself crowned king of Tara, simply by posting his guards around the coronation room and suggesting that the Archimandrite plays ball. If it is that easy, why does he bother trying to marry Strella at all? Why doesn't he just arrange a very convenient accident for Reynart and then make his move? There really doesn't seem much point in him marrying Strella so he can jump up a few spots in succession when he could it so much easier another way!

And then there is Grendel's roboticist, Lamia who, during the early episodes, looms large as the possible lynchpin not only for this story, but the entire arc of Key to Time stories. She certainly has conflicting loyalties. She is devoted to Grendel, something which he is only too happy to exploit even though he is quick to remind her of her peasant upbringing. Would her heart have broken and she turned against him? Also, Lamia is the only character so far in this series who has been interested in the segment of the Key on her planet. This was a perfect opportunity to shine a light on the mysterious, cosmic thing that is supposed to be important but whose nature hasn't been revealed and was still as obscure as it was at the beginning of the series. The story paves a way for a couple of scenes which sees her noticing something odd about the segment and then trying to study it with her equipment. Even the Doctor hasn't been that interested in it yet, beyond trying to collect the pieces. This was the chance to show that things were indeed changing, something which should have been happening as the quest was now shifting into it's final stages.

But I think I am just nit-picking about points of the sixteenth series. But the fact that I find it more entertaining to write about them and not the multiple androids and such does unfortunately say something about the plot. This story is also a pretty bad showing for Mary Tamm who gets to handle an actors dream of playing multiple roles in the same story, and sadly makes each one of them feel dull. I don't think it is really her fault but it is more of the script, written by David Fisher, which is to blame. Tamm plays two androids and two living people, though for all we know, from the emotions she gives off, it could all be the same thing. As much as I liked Mary Tamm in the show, perhaps it was good she only stuck around for one series...